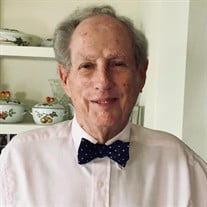 Myrtle Beach……. Alexander Smith Flesh, 93, died on October 10th, 2021. Alex is survived by his wife, Beryl Scott Flesh and four children: Alison F. Morrow (Doug) of Myrtle Beach SC; Alexander S. Flesh, Jr. (Wendy) of Toledo, Ohio; Anne B. Flesh of Atlanta, GA; Lindsay Davis of Indialantic, Florida; and a sister, Linda Flesh Brown of Dayton Ohio. Alex had six grandchildren, Ashlee Carson, Lindsay Morrow, Drew Davis, Jared Davis, Michael Flesh and Kallie Flesh, as well as two great grandchildren, Hollis and Kellen Carson. Alex was born in Piqua, Ohio. He attended prep school at The Hill School, Pottstown, Pennsylvania, graduating in 1945. He attended Princeton University, for two years and then graduated with a B.A. degree from Hamilton College, Clinton, New York, in 1950. He also did a postgraduate in Oxford, England. He served in the U.S. Army at the time of the Korean War 1950-51 and, after discharge, moved to New York City in 1951. Alex worked for R.H. Macy on the Executive Training program and as an assistant buyer. He left Macy’s to join a textile “jobber” in the city representing the underwear and related products of a family business started by his grandfather in Piqua, Ohio. He and Beryl Scott were married in Eastbourne, England in 1953 and lived in New York City until 1954 when he became Pacific regional sales manager for the family business, Atlas Underwear, living in Sausalito, California. He was transferred back to the home office of the company in Piqua, Ohio in 1956 and lived there until he and his wife moved to Sanibel, Florida in 2002. Mr. Flesh sold the family business in 1972. He performed consulting work with several foreign firms specializing in athletic gear and apparel, aiding them in their entry in the American market, and then started a distributorship of men’s and ladies’ sportswear. He retired in 1995. He was a humble man of varied interests, ranging from performing in amateur dramatics, broadcasting on local cable TV, singing, writing, sports, especially tennis, and many church activities. He served on the vestry of St. James Episcopal Church in Piqua, acting on several occasions as Senior Warden and Junior Warden. He also sang in the choir and was a Eucharistic Minister. He was active in civic affairs, serving on the boards of both the Y.M.C.A. and the Y.W.C.A. He and his wife, Beryl, were members of the Piqua Country Club. He was a member of the Racquet Club, the Miami Valley Polo Club, and the Dayton Art Institute. Alex and Beryl Flesh first came to Sanibel in 1975 and then purchased a condo on the beach in 1977. After their move to Sanibel in 2002 they built a home where they resided until 2015 when they sold the house and moved into their condo. Alex was very active in Saint Michael and All Angels Episcopal Church on Sanibel, having served on the vestry; sang in the choir, was a Eucharistic Minister and Lector, and served on many commissions within the church. He also served on the Board of Directors at his condominium, Sanibel Surfside, for several years. He was a member and former Chaplain of the Sanibel-Captiva Power Squadron and a member of one of Big Arts’ Great Books seminars. In 2019 they moved to Myrtle Beach SC, living in an assisted living community, enjoying being near their eldest daughter and her husband, grandchildren and two great-grandchildren, as well as frequently seeing their other children. Alex wrote the obituary above detailing his life events. This does not begin to encapsulate all he was to so many. He was a man of deep faith, character, and the definition of a true gentleman. Family and friends alike were constantly astounded by his deep intellect. An avid reader, he had a gift of language, the arts, and an ever-sharp memory on a multitude of topics ranging from English literature, geography, history, foreign languages, sports, dates, genealogy, etc. He had a huge appreciation and love of music ranging from classical, rock and roll, jazz, and contemporary. He imparted great wisdom on so many levels. Alex was a huge animal lover and had a gift for engaging and welcoming others into his life. A true confidante with a deep sense of humanity, he also had a marvelous sense of humor and quick wit which was such a joy to all who knew him. Alex treasured his wife of 68 years, Beryl. Alex liberally shared his love, compassion, and his generosity with his family and friends alike. Deeply loved and missed, he is etched in our hearts, as we look forward to reuniting with him again in Heaven. Bless you and rest in peace for a life well lived our Beloved Husband, Father, Grandfather, Great Grandfather, Uncle, Brother, and Friend. A Memorial service was held at St. Anne’s Episcopal Church in Conway, S.C. Donations may be made to: Saint. Anne’s Episcopal Church, Conway, SC Saint Michael and All Angels Episcopal Church, Sanibel Island, FL Goldfinch Funeral Home, Beach Chapel is assisting the family.

The family of Alexander Smith Flesh created this Life Tributes page to make it easy to share your memories.

Send flowers to the Flesh family.