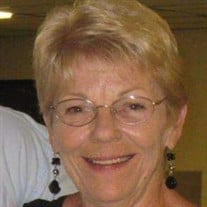 Anne M. Blake passed away peacefully December 9, 2020 in Surfside Beach, SC at the age of 77. Born on July 8, 1943 in Frostburg, MD she was the daughter of the late Stanton Melvin and Rosemary (Conway) Melvin and grew up in Mount Savage, MD. She was preceded in death by her husband, Carl. Anne was a loving wife, mother, grandmother and great-grandmother. Her family was her greatest achievement. She was known for her wit, her intelligence, her strong will and her skill at crossword puzzles. Anne was a graduate of Ursuline Academy and attended Loyola College before transferring to and graduating from Frostburg State College. She dedicated most of her professional life to teaching and was a beloved English teacher at Bishop Walsh High School in Cumberland, MD for 30 years. After raising their family in Cumberland, Anne and Carl retired and moved south to Surfside Beach where they immediately became involved in their Oceanside Village community. Anne sang with the community chorus, was a member of the Red Hats, organized a ladies’ golf & social group (the “nine & dine”), and volunteered at her community library. She also worked closely with Carl on the revitalization of the South Strand Chapter of the Lions Club where she became particularly involved with their scholarship program for outstanding local high-school students. Her family was the most important thing in her life evidenced by her love for her children, grandchildren and great-grandchildren. Each of them received their own package of her famous Christmas buckeyes every year and she kept up with all of them frequently via phone, text and social media. She took great pride in all of their achievements and will be greatly missed by them all. She is survived by her children, Patrick Blake and wife Krissy, Michael Blake, and Erin Clay and husband David; her grandchildren, Christian Blake and wife Juliette, Caroline Blake, Drew Blake, David Clay and Adam Clay; and great-granddaughters Flora Blake and Josephine Blake. She is also survived by her brother-in-law William Blake and his wife Jean and her sister-in-law Elizabeth Dow and her husband Roger and many nieces and nephews. A celebration of her life and burial services will be held at a later date, when circumstances allow. In lieu of flowers, those wishing to honor Anne’s memory are asked to donate to the South Strand Lions Club scholarship program at South Strand Lions Club, ATTN: Wanda Beneke, 1757 Paddington Street, Myrtle Beach, SC 29577.

Anne M. Blake passed away peacefully December 9, 2020 in Surfside Beach, SC at the age of 77. Born on July 8, 1943 in Frostburg, MD she was the daughter of the late Stanton Melvin and Rosemary (Conway) Melvin and grew up in Mount Savage, MD.... View Obituary & Service Information

The family of Anne M Blake created this Life Tributes page to make it easy to share your memories.

Send flowers to the Blake family.