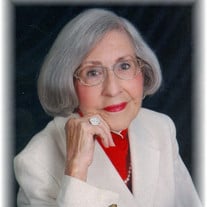 Annie Lou Spivey, 92, of Conway, SC, went home to be with the Lord on October 17, 2020, at her home. She was born in Conway, and was predeceased by her parents, Marvin and Minnie Floyd, her high school sweetheart and husband of 65 years, Kenneth Spivey, her son, John Spivey, and her sister, Virginia Powell. Mrs. Spivey graduated from Conway High School and attended Winthrop College. She began her career working at Horry Electric, was secretary at First Methodist Church, and was a substitute teacher at Conway High School. She ended her career as Executive Director at Waccamaw Economic Opportunity Council after 27 years, where her heart was truly dedicated to helping the needy. As her children were growing up, Mrs. Spivey was very active with the youth. She was the Director of the Children's Choir, Director of Vacation Bible School, President of the PTA, a Girl Scout Leader, and a room mother. However, she was best known for being "the Halloween Witch". Mrs. Spivey would come around every year for many years, in her witch costume to every elementary school room and people still remember her as "the witch"! Mrs. Spivey is known for her positive attitude, and her servant's heart. Her genuine love and compassion for her fellow man, combined with her strong Christian beliefs, have provided the motivation for many years of active service to her church, her city, her state and her country, for which she received many outstanding awards. Mrs. Spivey was a motivational speaker and an entertainer, and one of her favorite parts was playing Marilyn Monroe. She was a born leader, but believed that she was only one link in the chain and any successful project or program should always be shared with everybody involved. She received rewards from 4 governors for her service to the state of South Carolina, but the most significant was the "Order of the Palmetto", which is the highest State honor a civilian can receive. In 2003, she was inducted into the Hall of Fame at Conway High School for being an outstanding alumnus. Mrs. Spivey served as Board Chairman of the SOS Healthcare for 17 years. She also served on the Waccamaw Youth Council, Waccamaw Planning and Development Board, the Salvation Army Board, and the South Carolina Heart Association Board. For many years, one of Mrs. Spivey's big passions was politics and she volunteered as an election official with her husband. Realizing the need for "at risk" students, she was instrumental in establishing the Palmetto Motorsports Charter School. Mrs. Spivey was a charter member of Trinity Methodist Church where she sang in the choir for many years, chaired and served on many boards, was President of the Bunny Butler Circle, was President of the United Methodist Women for 4 years, and was a Lay Leader and Certified Lay Leader Instructor. She was an adult Sunday school teacher, she initiated what became known as the "We Care" groups, and was named the Methodist Woman of the Year at Trinity in 2007. Mrs. Spivey's greatest strength was witnessing. Her life was a witness for Christ and she would talk to total strangers and say, "We are all on a journey, and you are going to one of two places, heaven or hell? Where are you going?" She wanted everyone to know her savior, Jesus. Surviving are her daughter, Gloria Spivey Moyer (Michael) of Myrtle Beach, two sisters, Laura Sarvis of North Myrtle Beach, and Mary Alice Batten (Bob) of Camden, and a sister-in-law, Sarah Singleton of Conway. She had many nieces and nephews and treasured friends who called her Mama and Grandma. Her funeral services will be held at 2 PM Sunday, November 1, 2020 at Trinity Methodist Church with Rev. Tresco Shannon officiating. In lieu of flowers, for those wishing to honor Mrs. Spivey's memory, please consider making a donation to Trinity United Methodist Church, Building Fund, PO Box 1072, Conway, SC, 29528. The church got flooded and is in the process of rebuilding, so this fund is near and dear to Mrs. Spivey's heart. Please sign the online guestbook at www.goldfinchfuneralhome.com Goldfinch Funeral Home, Conway Chapel is in charge of arrangements.

Annie Lou Spivey, 92, of Conway, SC, went home to be with the Lord on October 17, 2020, at her home. She was born in Conway, and was predeceased by her parents, Marvin and Minnie Floyd, her high school sweetheart and husband of 65 years, Kenneth... View Obituary & Service Information

The family of Annie Lou Spivey created this Life Tributes page to make it easy to share your memories.

Send flowers to the Spivey family.