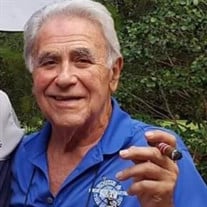 Anthony “Bud” La Marca, 86 Anthony “Bud” La Marca, a resident of Heritage Plantation in Pawleys Island, SC died January 26, 2021. Bud was born on February 6, 1934 in Staten Island, NY to Anthony and Carrie La Marca. He was selected to attend the prestigious High School of the Performing Arts in New York City as a talented young trumpet player. Following graduation and while also serving in the National Guard, Bud was the leader of a successful big band, Buddy Lamarr and his Orchestra, and it was during one of his “gigs” in New York City where he met his loving wife of 65 years, Barbara. Bud then began a near 50 year career as a banker, during which time one of his many accomplishments was chairing a committee of international bankers who were charged with developing an efficient system to move money around the globe. The result of his committee was the establishment of the system that is still used today by financial institutions to transfer funds across the globe. Bud was also very involved in the township business of his former home residence of Kinnelon, NJ, where he served as councilman for 20 years as well as a member of the Board of Trustees of the Kinnelon Public Library, where a children's library was named in his honor. Bud was an avid golfer, enjoyed woodworking and spending time in his yard and treasured the time he spent with his family, especially his 8 grandchildren and 2 great grandchildren. Bud is credited with coining the now popular phrase “your ass” and was solely responsible for 50% of the Averna purchases in North America. Bud is survived by his wife Barbara; his sons Kevin (Sabine), Robert (Jill), Anthony and Darren (Alicia); grandchildren Christopher, Michael (Jessica), Nicole (Josh), Andrew (Melissa), Stephen (Nora), Brian (Jessica), Melissa (Nick), Michelle (Madison); and great grandchildren Dominic, and Jack. He was predeceased by his mother and father as well his brother Donald and great grandson Joseph. Memorial services will be held at future dates at the Heritage Plantation clubhouse and Gate of Heaven Cemetery & Mausoleum, East Hanover NJ. The family wishes that in lieu of flowers, donations may be made to St Jude Children’s Research Hospital.

The family of Anthony "Bud" La Marca created this Life Tributes page to make it easy to share your memories.