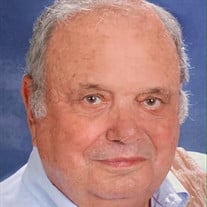 Arthur “Art” Robert Blenk of Pawleys Island, SC and formerly of North Salem, NY, passed away peacefully on September 15, 2020. Art was raised by Irene and Arthur Blenk in Franklin Square, NY where he attended Sewanhaka High School. As a United States Marine from 1953-1956, he served his country with the rank of Corporal in the Korean War Era and received the National Defense Service Medal. Upon completion of his military service, Art went on to receive a degree in Mathematics from Pennsylvania State University, where he was a Sigma Chi, and then a Masters in Operations Research from New York University. He was a dedicated member of the Marine Corps League-Grand Strand Detachment 873, Murrells Inlet, SC, where he served terms as Commandant, Adjutant and Chaplain. He also served as the Department Chaplain for the Marine Corps League Department of South Carolina. Through his service to the Myrtle Beach and Grand Strand communities in the Marine Corps League, Art spent countless hours serving the US Marine Reserve’s Toys for Tots program, Wounded Warriors and the Grand Strand’s Help4Kids & Backpack Buddies program. He was also involved with the local Junior ROTC program and the Boy Scouts of America’s Eagle Scout program where he had the opportunity to be a presenter of the esteemed Marine Corps League Good Citizenship Award to JROTC and BSA Eagle Scouts, exemplifying exactly what it meant to be a good citizen. In 2013, Art received the Chapel of Four Chaplains Legion of Honor Humanitarian Award and in 2018 the Distinguished Citizen Award, both prestigiously given by the Marine Corps League. Art is survived by his wife of 52 years, Anne Johnson Blenk; children, Tera Adams Blenk, Thomas Hadwin Blenk (Hyuna) and Elizabeth Blenk Kiniry (Christian); and five grandchildren, whom he loved more than anything else in the world, Robert, Daniel, Annabelle, Caroline and Hadwin. Those who knew Art could tell you that he was a man of his word and always completed a task on hand. He loved football and never missed a Penn State or NY Giants game. He was a voracious reader and completed every NY Times crossword puzzle. As a new hobby after the age of 70, he wrote dozens upon dozens of Op-Ed pieces that were published in the Sun News, proving that you’re never too old to start something new. Art adored his grandchildren and took great pride in their accomplishments as if they were his own. Sometimes described as an old war horse, he had a story or two to tell to those who were lucky enough to hear about his life’s adventures. Services will be held outside under the oak trees at The Abbey at Pawleys Island, 46 Gathering Lane, Pawleys Island, SC 29585 on October 5, 2020 at 2:00 P.M. The family requests that in lieu of flowers in memory of Art, please send donations for the Marine Corps League Grand Strand Detachment's educational scholarship program known as the "Art Blenk Scholarship". Checks or money orders should be made to the "Marine Corps League Grand Strand Detachment 873" and sent to the following address: Marine Corps League Grand Strand Detachment 873 Attn: Commandant (Art Blenk Scholarship Fund) P.O. Box 1104 Murrells Inlet, SC 29576 Sign an online guestbook at www.goldfinchfuneralhome.com Goldfinch Funeral Home, Beach Chapel is in charge of the arrangements.

The family of Arthur "Art" Robert Blenk created this Life Tributes page to make it easy to share your memories.