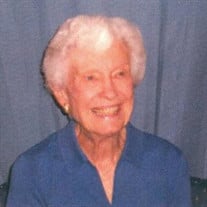 Barbara Miller Harden, age 96, of Pawleys Island, passed away Wednesday, June 24, 2020 at Inlet Coastal Resort. Barbara was born in Omaha, Nebraska on December 21, 1923 to Dee and Pearl Miller. After moving to Pawleys Island in 2006, she was a resident of the Lakes of Litchfield until 2016 when she moved to Inlet Coastal Resort. While living at the Lakes of Litchfield, Barbara was active in the community, walked 2 miles each morning, and twice a week on the beach. She served on the Resident Council, and chaired the Welcoming Committee. Following high school, Barbara went to Penn Hall Junior College in Chambersberg, Pennsylvania where she majored in business/accounting and graduated in 1944. She returned home and went to work for Westinghouse as an accountant. She met her future husband, Wylie while on a blind date. They married after the war in 1948 and lived in a Quonset hut heated by coal while her husband completed his engineering degree at the University of Michigan. The Hardens moved to New Jersey and her husband went to work for New Jersey Bell. They lived in Winston-Salem, NC for 5 years before returning to Morristown, NJ. Her husband passed in 1982 and Barbara moved to a retirement community in Brick Township, NJ. She lived here for 22 years before moving to South Carolina. While living in Brick Township, she shared her life with Anthony Colucci, who became part of the Harden family. He predeceased her in 2004. There are no grandchildren, but Barbara has been a grand dog mother to all of the Harden pets. Barbara attended Belin Memorial United Methodist Church. She is survived by her son, Douglas Harden and his wife, Christine, and two grand dogs, Brody and Corkie. The Hardens thank Inlet Coastal Resort for their remarkable care and compassion during the last few months of her life. In lieu of flowers, memorial donations may be made to All4Paws Animal Shelter, 708 Petigru Drive, Pawleys Island, SC 29585. No services are planned at this time. Sign an online guestbook at www.goldfinchfuneralhome.com. Goldfinch Funeral Home, Litchfield/Pawley’s Island Chapel is serving the family.

Barbara Miller Harden, age 96, of Pawleys Island, passed away Wednesday, June 24, 2020 at Inlet Coastal Resort. Barbara was born in Omaha, Nebraska on December 21, 1923 to Dee and Pearl Miller. After moving to Pawleys Island in 2006, she was... View Obituary & Service Information

The family of Barbara M. Harden created this Life Tributes page to make it easy to share your memories.

Send flowers to the Harden family.