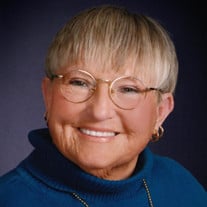 Barbara A. Martin, age 72, of Garden City Beach, South Carolina passed away peacefully on January 21, 2020 from ongoing medical issues. Today we rejoice in the knowledge that Barbara has passed the bonds of earth and time, as we know it, and is forever at home with the Savior she faithfully loved and served. Although we say goodbye to her earthly shell, we do not want to remember just that. We want to recall the life and vitality that she had. We want to reflect on her fun loving nature, her infectious laugh and on how she enjoyed life and accepted change. She endured many health problems and looked forward to new experiences and challenges with enthusiasm and courage. Barbara was born in Washington DC to the late Betty Furmage Richmond and the late Lieutenant Colonel James A. Richmond. She graduated from Towson State College, Baltimore, Maryland, in 1969 where she met her husband of 49 years (Bob) Robert H. Martin Jr. Mrs. Martin was a stay at home Mom to her only child, her precious son, Rob until he went to school. She did have quite a few diverse jobs to supplement the family’s income until she was recertified to teach in 1983. She taught dramatic arts and english in Calvert County, Maryland, from 1983 to 1999. Mrs. Martin directed numerous plays and musicals at Calvert High School. Her “pied piper” personality attracted at least 350 students to her award winning productions. She was voted “students favorite teacher” multiple times. She even wrote a play, directed it, produced it and saw it performed. She and Bob retired and moved to Garden City Beach, South Carolina in 1999. She worked for 8 years as a receptionist for Palmetto Internal Medicine. She was an active participant at the Church of the Resurrection, Surfside Beach, for 13 years where she wrote and directed plays and dramatic biblical productions. She also was an active member of the Shepherd of the Sea Lutheran Church in Garden City since 2012. Mrs. Martin leaves behind her beloved husband Robert H. Martin Jr. and her loving son Robert M. Coronado, her son-in-law Leonardo F. Coronado II, her oldest brother, Jim Richmond and her youngest brother, Robert Richmond. A celebration of life service will be held on Tuesday January 28, 2020 at 1 pm at Shepherd of the Sea Lutheran Church. The family will receive friends at 12 pm. In lieu of flowers, memorials may be made to Shepherd of the Sea Lutheran Church, St. Judes Children's Research Hospital, Horry County Food Bank or a charity of your choice.

Barbara A. Martin, age 72, of Garden City Beach, South Carolina passed away peacefully on January 21, 2020 from ongoing medical issues. Today we rejoice in the knowledge that Barbara has passed the bonds of earth and time, as we know it, and... View Obituary & Service Information

The family of Barbara A Martin created this Life Tributes page to make it easy to share your memories.

Send flowers to the Martin family.