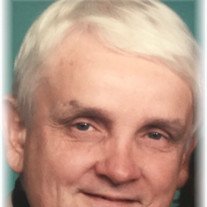 A passionate educator, historian and loving husband and father, Bernard "Bernie" Lee Allen, Ph.D., age 83, passed away at his home on July 20, 2020. Dr. Allen was born on July 19, 1937, in Kincheloe, Harrison County, West Virginia. He was the son of the late Forest Reger Allen and the late Christine Virginia (Davis) Allen. Dr. Bernie Allen graduated from Weston High School, Weston, WV, in 1955 where he played football, basketball, and baseball and was awarded the American Legion Citizenship Award as a senior. He earned a Bachelor of Science degree in Business Administration at West Virginia University (WVU) in 1959 and served WVU student body treasurer. He also earned a Master of Arts degree in Philosophy at Southern Illinois University in 1964 and a Doctor of Philosophy degree in History at WVU in 1971. In August 1963, Dr. Bernie Allen began a career in teaching which spanned fifty years, and began at Weston High School. Forty-eight of those years were teaching at institutions of higher education, including West Virginia University at Parkersburg (WVU-P), Horry Georgetown Technical College, and Coastal Carolina University. As an author, he wrote four books, including Parkersburg: A Bicentennial History; The Wood County Poor Farm Property: A Brief History, 1798-1986;Compassion: A History of the Henry Logan Children's Home (Established 1884);and Where It All Began: The Story of the People and Places Where the Oil and Gas Industry Began - West Virginia and Southeastern Ohio (co-authored with David L. McKain). He contributed to numerous periodical articles about the history of West Virginia and the Mid-Ohio Valley. In 1996, the Carnegie Foundation for the Advancement of Teaching selected Dr. Allen as the state of West Virginia's Professor of the Year while he was serving as a Professor of History and Philosophy at WVU-P. Upon his retirement in 1999, WVU-P dedicated a classroom in his honor. During Dr. Allen's last 13 years of teaching, he taught as a Teaching Associate at Coast Carolina University and at Horry Georgetown Technical College. He was a member of St. Anne's Episcopal Church in Conway, SC, West Virginia Army National Guard veteran, and a member of the Sons of the American Revolution. Dr. Allen is survived by his wife of 56 years, Forrest (Potts) Allen; his son, Dr. Benjamin Allen of Sacramento, CA; his daughter, Asheley Allen Hayes and her spouse, Reid Hayes of Charlotte, NC; his two granddaughters: Caroline and Olivia Hayes of Charlotte, NC; his sister Shirley A. Eskew of Pittsburgh, PA; his brother-in-law, Charles K. Potts of Adelaide, Australia; and six nieces and two nephews. Funeral services will be privately held at the funeral home. Anyone who wishes to view the service via Webcasting, please contact the funeral home at 843-248-4211 for the link. The family asks that donations be made to St. Anne's Episcopal Church, PO Box 752, Conway, SC 29528. Please sign the online guestbook at www.goldfinchfuneralhome.com Goldfinch Funeral Home, Conway Chapel is serving the family.

A passionate educator, historian and loving husband and father, Bernard "Bernie" Lee Allen, Ph.D., age 83, passed away at his home on July 20, 2020. Dr. Allen was born on July 19, 1937, in Kincheloe, Harrison County, West Virginia. He was the... View Obituary & Service Information

The family of Mr. Bernard Lee "Bernie" Allen Ph.D. created this Life Tributes page to make it easy to share your memories.

A passionate educator, historian and loving husband and father,...

Send flowers to the Allen family.