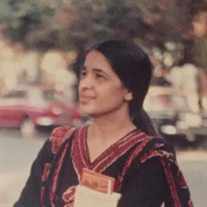 Bhan Mati Kuver, age 86, of Flint, Michigan, passed away Monday, January 31, 2022 in Myrtle Beach, South Carolina with her devoted and loving family by her side. She was born January 10, 1936 in Suva, Fiji, the eldest child of the late Amar and Jagwanti Singh. She attended the Arya Samaj Girls School in Samabula, Suva, where she was the first in her family to attend high school. She then attended Nasinu Teachers’ Training College in Nasinu, Fiji, where she focused on Home Science. Upon graduation, she was offered a position at the newly opened Labasa Secondary School, where she taught, coached the girls’ basketball team, and was a role model for her female students. While there, she met Dr. Pradyumna Kuver, who had established the first private medical practice in Labasa after graduating from the Fiji School of Medicine and Calcutta Medical College. They were married at her family home in Samabula, Suva in 1959. In 1962, Bhan attended the Royal Melbourne Institute of Technology in Melbourne, Australia. She then lived with her husband and children in Labasa until 1969, before moving to Suva. They then migrated to the United States in 1971. They lived briefly in Vancouver, BC and Portland, Oregon until Pradyumna joined the Internal Medicine Residency Program at McLaren General Hospital in Flint, Michigan. They settled in Flint, where Pradyumna established a private practice in Internal Medicine. Bhan and Pradyumna built a family home in 1977, a home that Bhan remained in until shortly before her passing. She was a devoted mother and grandmother who will be remembered for creating a home full of laughter where she welcomed and nurtured everyone with love. Besides her parents, she was preceded in death by her husband, Dr. Pradyumna Kuver and her brother, Vijay Singh. She is survived by her children, Rahul Kuver and his wife Lesa Morrison, Ranuja Lale, Rajat Kuver and his wife Shivani, and Rekha Kuver and her husband Paul Oliver; her grandchildren Ian, Fariba, Daikan, Akira, Aria, Uma, and Meera; and her siblings Ben Mati Dutt, Shiri Prasad, Jaswant Singh, Bindra Singh, and Sushil Singh. Prayers and a celebration of her life will take place at a later date. To sign an online guestbook, please visit www.goldfinchfuneralhome.com Goldfinch Funeral Home, Beach Chapel is serving the family.

Bhan Mati Kuver, age 86, of Flint, Michigan, passed away Monday, January 31, 2022 in Myrtle Beach, South Carolina with her devoted and loving family by her side. She was born January 10, 1936 in Suva, Fiji, the eldest child of the late Amar... View Obituary & Service Information

The family of Bhan Mati Kuver created this Life Tributes page to make it easy to share your memories.

Send flowers to the Kuver family.