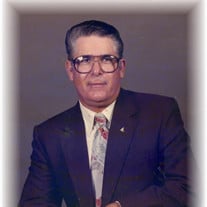 Conway&#8230;&#8230;Bobby Joe Inman, age 85, passed away Tuesday, August 17, 2021. Mr. Inman was born in Conway a son of the late Luther and Sadie Maude Norris Inman. Prior to retirement, he was employed by Grove Manufacturing. In addition... View Obituary & Service Information

The family of Bobby Joe Inman created this Life Tributes page to make it easy to share your memories.

Send flowers to the Inman family.