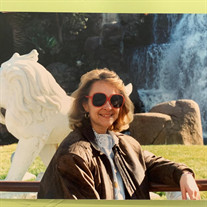 Bonnie Ciccone, of Murrell’s Inlet, SC began dancing with the angels on March 8, 2020. She was surrounded by the people who loved her most. Bonnie was born in Bronx, NY on August 22, 1943 to Nicholas and Faye Sulpizi and grew up to be one tough broad. She was married to her loving husband George Ciccone on March 4, 1972 who brought his son Chris to the wedding ceremony too! Their daughter Heather Ciccone was born on March 1, 1974 and Kerri Kenyon was added to the family in 1988. By her own account, all Bonnie wanted was to be a mother. And she was damn good at it! Bonnie worked a series of jobs over her lifetime. She was a librarian for Cheney Free Public Library in Hoosick Falls, NY. Upon completion, she filled a bookkeeping position at Troy Cabinetry in Troy, NY. She subsequently moved on to bookkeeping duties at Burch Bottle & Packaging Inc. in Watervliet, NY, retiring in 2012. In her mind, those were secondary occupations – first and foremost was the care and well-being of her family. She especially enjoyed the duties of life coach, proof-reader, consoler, advice columnist and purveyor of good order and discipline. She was also the family chef. If you ate dinner at our house,you would certainly loosen your belt buckle and top button,take some home and always have an open invitation to come back for more. Her most valued occupation, grandmother, began in 1995 with the birth of her grandson Edward Gamble. Vanessa Gamble called her grandma in 1999, Carina Ciccone joined in 2000 and Alyssa Gamble rounded out the crew in 2001. Eddie, Vanessa and Alyssa are Heather’s children. Carina is Chris and Gina’s daughter. Bonnie loved to be surrounded by her grand babies and was fiercely protective of them all. Bonnie is survived by her husband George, her children Chris Ciccone and wife Gina, daughters Heather and Kerri, grandchildren Eddie, Vanessa, Carina and Alyssa, sister Gail Turner and brother Nicholas Sulpizi, Jr. She was extremely close with all of her nieces and nephews,cousins, extended family and everyone who called her friend. Bonnie was kind to everyone (human or animal), funny, selfless, compassionate and forgiving. Most of all, she wasthe best mother anyone could ever have. Bonnie asked that you celebrate her life by conducting random acts of kindness. (And, if you live in South Carolina, consider assisting the Saint Francis Animal Shelter in Georgetown). She loved family more than life itself. If you knew her, your life was better because you did. If you never met her, well, your loss – that tough broad would tell you so too. A memorial mass will be held at 10:00 AM Saturday, March 14, 2020 at St. Michael Catholic Church.

Bonnie Ciccone, of Murrell&#8217;s Inlet, SC began dancing with the angels on March 8, 2020. She was surrounded by the people who loved her most. Bonnie was born in Bronx, NY on August 22, 1943 to Nicholas and Faye Sulpizi and grew up to be... View Obituary & Service Information

The family of Bonita A. (Sulpizi) Ciccone created this Life Tributes page to make it easy to share your memories.

Bonnie Ciccone, of Murrell’s Inlet, SC began dancing with the...

Send flowers to the Ciccone family.