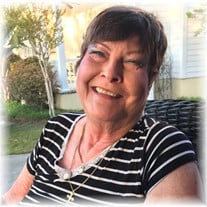 A funeral service for Brenda Dutton Holt, 77, will be held May 27 at 2 p.m. in Goldfinch Funeral Home, Conway Chapel with Rocky Taylor as officiant. Mrs. Holt passed away May 24 in the Medical University of South Carolina. Born in Columbus County, N.C., she was the daughter of Joseph and Opal Dutton. She attended Tabor City schools before her family moved to South Carolina and she graduated from Myrtle Beach High School. Mrs. Holt and her husband, William Graham "Bill" Holt, settled in Conway in 1967 after completing his Naval Service. She graduated from Coastal Carolina University and, after spending time as a stay-at-home mom, she joined the Horry Independent newspaper as an advertising salesperson. The more than proficient saleswoman got the weekly newspaper off to a successful start. While there she helped start Conway SuperStars competition and Conway's Riverfest celebration, which was at the time the July Fourth celebration. She later went to work selling insurance for Farm Bureau where, again, she excelled winning numerous trips. The couple were world travelers having been to Germany, France, Alaska, Hawaii and San Francisco. She loved country music especially when it was being performed by members of her extended family. Brenda was very athletic being remembered most as an ace tennis player when she was younger. She also enjoyed fishing. She served one term as president of the Horry County Gamecock Club and the Conway Chamber of Commerce. She won the Conway Chamber of Commerce's Lavern H. Creel Lifetime Achievement Award in 2019. She was known as a woman about town and a fashionista with a large and sometimes flamboyant collection of clothes and her always attention-getting hairstyles. Her greatest love was her husband, their three children and her extended family, but she served as a mother to many giving love and support to Conway's children who often hung out at the Holt home where they were welcome to play foosball or build a high school homecoming float. She loved her children's friends and they loved her, some of them thinking of her as a second mom. She was a member of First Baptist Church in Conway and a former president of her Sunday School Class. Mrs. Holt is survived by her husband of 58 years; one daughter, Susan Graham Holt of Conway; two sons, Mark Anthony Holt (Wendy) of Myrtle Beach and Brian Scott Holt (Mandy) of Gainesville, Florida; one sister, Carol Dutton James of Conway; grandchildren, Eden, Charles, Brian and Matthew Holt; plus, many nieces, nephews and cousins. In addition to her parents, she was predeceased by a sister, Judy Dutton McCants; and two much loved brothers-in-law, Winston McCants and Lloyd James. Visitation will begin at 1 p.m. in Goldfinch Funeral Home, Conway Chapel Goldfinch Funeral Home, Conway Chapel is serving the family.

A funeral service for Brenda Dutton Holt, 77, will be held May 27 at 2 p.m. in Goldfinch Funeral Home, Conway Chapel with Rocky Taylor as officiant. Mrs. Holt passed away May 24 in the Medical University of South Carolina. Born in Columbus... View Obituary & Service Information

The family of Brenda Holt created this Life Tributes page to make it easy to share your memories.

A funeral service for Brenda Dutton Holt, 77, will be held May...

Send flowers to the Holt family.