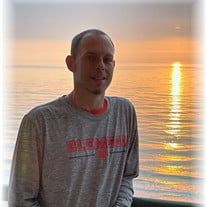 Easley... Broade Allen Edge, age 46, passed away Friday, April 29, 2022. Broade was born February 5, 1976 in Sault Ste. Marie, Michigan which inspired him to follow the Detroit Lions. An avid sports fan, Broade could quote endless facts or stats across most sports. He also loved children and was able to combine those two interests by coaching and mentoring many kids over the years. Broade graduated from Clemson University with a Bachelor’s degree in secondary education. He worked on campus and continued to be connected to the university and student athletes. Involved in his community, he had a big heart and often quietly served others by helping the homeless and those needing a meal. He will be remembered as a loving and devoted son, fiancé, father, grandfather, brother and friend. He put others first, even if he had to go without. Broade’s keen sense of humor brightened the lives of those who knew him and it was often said he “never met a stranger.” He always looked for the good in others. Broade was predeceased by his maternal grandparents, E. Freeman Allen and Claudia Allen and his paternal grandparents, W.B. Edge, Jr. and Mabeleen Edge. Surviving are his mother, Judy Allen Edge; his father, Sandy Edge (Becky); his fiancé and mother of his son, Majirl Lyles; a son Christopher Allen Edge; a daughter, De’Asia Martin; brothers, Brandon Blake Edge (Crystal); Adam Edge Harper (Molly); two stepsisters, Angela Shine (David), Johanna Hartmann (Phil) and their children; two nieces, Brianni and Braelynn Edge; two grandchildren, Rylan and Kyrie; many aunts, uncles, cousins, and extended family. Graveside services will be held at 11:30 AM Friday, May 6, 2022 at Cool Springs Southern Methodist Church Cemetery with Rev. Larry Allen officiating. The family will receive friends immediately following the service in the church fellowship hall. Memorial donations may be made in Broade’s memory to Clemson Community Care, P.O Box 271, Clemson, SC 29633 Please sign the online guest book at www.goldfinchfuneralhome.com Goldfinch Funeral Home, Conway Chapel is in charge of the arrangements.

The family of Broade Allen Edge created this Life Tributes page to make it easy to share your memories.

Send flowers to the Edge family.