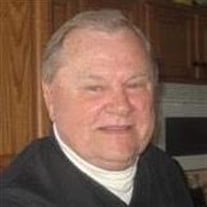 C. “Quimby” Roberts age 87, of Surfside Beach, passed away Sunday, July 5, 2020 at Grand Strand Regional Medical Center. He was born on January 27, 1933 in Collinsville, AL to the late Mather Lee and Edna Bernice Roberts. He graduated from Jones Valley High School in Birmingham, AL and later went on to earn an associate’s degree. Quimby was proud to honorably serve his county in the United States Navy. Later, Quimby obtained his CLU license in the 1970’s and was in the insurance business for over 40 years. He was a member of the Golden Springs Baptist Church in Anniston, AL. He originated the Coastal Carolina Football Chain Crew and was a member of the Socastee Chain Crew for 15 years and was a member of the Tuesday Grouch Club “Where we eaten next Tuesday?” (per Quimby). He was senior citizen of the year in South Carolina. His family adored him and he was everyone’s hero. Besides his parents, Quimby was preceded in death by his wife of 67 years, Betty Marie Roberts; brothers, M.L. Roberts (Junior) and Wightman Roberts and a brother- in- law, Bill Richards. Quimby is survived by 3 daughters, Debra Deaton (Allen), Cindy Roberts and Carol Fallon all of Surfside Beach; 5 grandchildren, Kip Deaton and Abbey, Holly Johnson, Wesley Bilyeu, Aubrey Benjamin and Alex and Caylee Fallon; 2 great grandchildren, Dylan Johnson and Ellarose Deaton; a sister, Gail Richards of Dawson, AL; a brother, Aubrey “Wayne” Roberts (Charlotte) of Collinsville, AL; special friends for 49 years, Patti and Don Taylor; 2 sisters, in law, Sherry Roberts and Betty Jean Roberts. Quimby had special places in his heart for all of his grandchildren, great-grandchildren and all of his nieces and nephews. The family would like to say a special Thank you to Lower Cape Life Care and Wanda Gainey for their special loving care during Quimby’s illness. In lieu of flowers the family request memorial donations be made to: Lower Cape Fear Life Care: attention donations, 1414 Physicians Drive Willington NC 28401. Sign an online guestbook at www.goldfinchfuneralhome.com Goldfinch Funeral Home, Beach Chapel is in charge of the arrangements. A Celebration of Quimby and Betty’s life will be held at a later date.

The family of C. "Quimby" Roberts created this Life Tributes page to make it easy to share your memories.