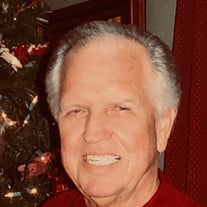 C. Ray Reece, age 85, of 556 Highway 548 Conway, died Sunday, February 7, 2021 at his residence due to complications related to ALS: Lou Gehrig's Disease. Born on November 8, 1935 in Haywood County, NC, he was the son of the late Kate Reece Gore and the late Roy C. Reece. Ray was a 1954 graduate of Wampee High School and was also a member of the first graduating class of Coastal Carolina College in 1959. Ray was a Sergeant in the Army, stationed in Fairbanks, Alaska in 1955 and received the Good Conduct medal for his service. He was the General Manager of the Pepsi-Cola Bottling Co., Inc. of Conway where he served faithfully for 51 years. He also served as Vice President of the South Carolina Bottlers Association. He was involved in several community organizations, including Junior Achievement, and was an active member for many years at Maple Baptist Church where he served as Church Treasurer, Chairman of the Trustees and Chairman of the Deacons. Ray served many terms as an elected member to the Crabtree Watershed Conservation District and received the Conservation Citizenship Award for a lifetime of outstanding conservation stewardship in 2017. He was named as Coastal Carolina University's Distinguished Alumni of the Year in 2003 for making significant contributions professionally and in the community. Ray was a devoted family man and loved spending time and making memories with his children, loved ones, and close friends. He was an avid follower of many sports, spent countless hours outside on his tractors, and was a mentor to many throughout his lifetime. He was preceded by his wife of 52 years, Donna Long Reece of Conway, a daughter, Candice Reece Shelley of Aynor, and his late wife, Barbara Shannon Reece of Conway. He is survived by daughters, Gay Reece Todd (Junior), Ellen Reece Holt (Timmy), and Nora Gail Reece Terry (Carlton), a son, Don Reece (Suzi), of Conway, sisters, Anna Graham of Loris, Helen Graham of Loris, Shirley Butler of Conway and Kitty Weldon of Texas, grandchildren, Ryan Shelley (Tessa) of Aynor, Clint Shelley (Devan) of Aynor, Annie Barfield (Justin) of Aynor, Ashley Todd, Cliff Todd, Lindsey Holt Haas (Eric), Donnie Reece, Sophie Reece, all of Conway and Mary-Hannah Cashion of Wilmington, NC, great grandchildren, Ethan Shelley, Chloe Shelley, Claire Shelley, Abigail Barfield, Molly Rae Barfield all of Aynor and a dear lifelong friend, Bobby J. Calder. A graveside funeral service will be held at 2:00 p.m. on Wednesday, February 10, 2021 at Thompson Cemetery, located on State Highway 65, north of the Maple Community. In accordance with CDC guidelines, facemasks and social distancing will be required. Please sign the online guest register at www.goldfinchfuneralhome.com . Goldfinch Funeral Home, Conway Chapel, 606-610 Beaty Street Conway, SC 29526, will be overseeing the arrangements.

C. Ray Reece, age 85, of 556 Highway 548 Conway, died Sunday, February 7, 2021 at his residence due to complications related to ALS: Lou Gehrig's Disease. Born on November 8, 1935 in Haywood County, NC, he was the son of the late Kate Reece... View Obituary & Service Information

The family of C. Ray Reece created this Life Tributes page to make it easy to share your memories.

Send flowers to the Reece family.