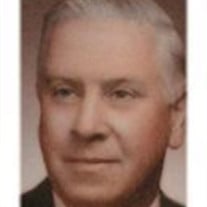 Myrtle Beach… Dr. Carl J. Records, M.D., age 102, passed away Tuesday, June 9, 2020 with his wife by his side. Born March 26, 1918 in Edinburg, IN, he was the son of the late James and Edna Goble Records. Dr. Records was raised like a typical farm boy; he milked cows, gathered eggs, and planted and harvested crops. He graduated from Edinburgh High School, where he was the oldest living member. Dr. Records then graduated from Franklin College and Hanaman Medical School, where he received his M.D. in General and Homeopathic Medicine. His internship was at Methodist Hospital in Indianapolis, IN. On February 12, 1943, he married Alma Souder and together they raised one daughter, Martha, who was born August 30, 1956. Dr. Records served in the US Army during World War II. He spent two and half years in France, Germany, and Austria. He was discharged with the rank of Captain. After his discharge, he was a resident physician at Women's Homeopathic Hospital in Philadelphia. In 1948, he moved to Cape May, NJ and started his private practice. In 1964, he was the Cape May County physician and beginning in 1968 he served as the County Medical Examiner for 10 years. Dr. Records was an active member of the Rotary Club for 50 years and he holds the title of perfect attendance for all of those years. He belonged to the Cape May Rotary of Cape May, NJ, the Mid Jersey Cape Rotary in Cape May Court House, NJ, the Carolina Forest Sunrise Rotary in Conway, SC and the Conway Rotary in Conway, SC. On November 25, 1979, he married Helen Wimer. He enjoyed cruising and they traveled extensively. After 50 years of practice, he retired from the medical profession and moved to South Carolina, where he became an avid golfer. On three occasions, he made a hole-in-one! Dr. Records joined First Baptist Church in Conway, where he was a member of the Angler Sunday School Class. Along with his parents, Dr. Records was predeceased by his first wife, Alma Mae Souder Records, two brothers, Neil and Richard Records, and a stepdaughter, Karen Glazier. He is survived by his wife, Helen June Records; one daughter, Martha Heathcoate and husband, Jade of Myrtle Beach; a sister, Kathleen Smith; a stepson, Robert Eugene Glazier and wife, Kathleen of Greensboro, NC; five grandchildren, Marina Adams and husband, Kit, Heather Karst, Robert Eugene Glazier, Jr., Laura Landry and husband Roger, and Sarah Smith and husband Graig; and five great grandchildren, Isabelle Karst, Killian Adams, R.J. Landry, Eva Smith, and Liam Landry. Memorial services will be held at 11:00 AM Monday, June 15, 2020 at First Baptist Church in Conway with Rev. Rocky Taylor and Rev. Brian Hoffman officiating. The family and church have requested that anyone attending the service to wear a mask. The church will provide them for anyone who does not have one. Memorial donations may be made to First Baptist Church, 603 Elm Street Conway, SC 29526 or to the Conway Rotary Club, 1515 Mill Pond Road, Conway, SC 29526. Please sign the online guestbook at www.goldfinchfuneralhome.com Goldfinch Funeral Home, Conway Chapel is serving the family.

The family of Dr. Carl J. Records, M.D. created this Life Tributes page to make it easy to share your memories.

Send flowers to the Records family.