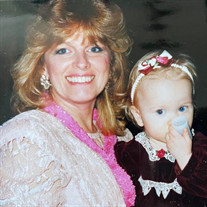 It is with profound sadness the family announced the passing of Carol Lynn Fleming, 67, on July 18, 2020 from complications of metastatic breast cancer. She was a loving mother, devoted wife, and friend to all whose lives she touched. She was born December 27, 1952 as Carol Lynn Miller in Iowa to David and Marilyn Miller. Immediately after Carol was discovered with a hearing impairment, the family relocated to Illinois for her to attend a mainstream deaf education program. She was married to her childhood classmate, James Robert Fleming of 24 years, but knew each other for sixty-two years. They met and attended Lowell Elementary School. Carol continued her education at Emerson Middle School, Westmont Jr. High, and then to Hinsdale South High School. Jim escorted Carol to her first homecoming dance but parted ways after high school. They found each other again 22 years later. She is survived by her husband, James Fleming, one daughter, Kellie Fleming 23, and two step-sons, John Fleming 29, and Joseph Fleming 31, siblings, John Miller (Becky), James Miller (Cyndi), Donna (Shezmina) Miller Schreur Aga, and Robert (Katie) Miller. Carol was predeceased by her parents, David and Marilyn and brother, Kenneth Miller, as well as paternal and maternal grandparents. Carol loved seeing her grandparents in Iowa and David's cousins on the farm in Minnesota. In addition, she looked forward to spending Christmas with her Miller cousins as well. The gatherings transformed into family and friends reunions held annually, then later developed into family and friends cruises. Carol loved to travel. One of her favorite places was Aruba. She loved dogs, especially Lucky who understood sign language, gardening, was an accomplished seamstress, a devoted Cubs fan and was thrilled they won the 2016 World Series. She loved to cook and was a vegetarian for 40 plus years. Carol was the first hearing impaired student to graduate beautician school in the state of Illinois and was a key punch bank operator for about 20 years. She was a faithful servant to the Lord. She helped organize deaf parties, ministered to deaf children, and was part of the deaf choir at her church. She was a current member of the Carolina Forest Community Church and childhood member of the Calvary United Methodist Church. She was a mother, confidant, and friend to so many. Life was too short, but she contributed so much during that time. Her world was about being unapologetically kind, especially to those who needed it the most. The intermediate family is grateful for all the warm condolences and support during this difficult time. A GoFundMe account will be made in Carol Fleming’s name. A memorial service will be held at Carolina Forest Community Church on July 23, 2020 at 7:00 PM. Flowers, cards and etc. will be accepted at the Fleming residence, contact Kellie Fleming for details.

It is with profound sadness the family announced the passing of Carol Lynn Fleming, 67, on July 18, 2020 from complications of metastatic breast cancer. She was a loving mother, devoted wife, and friend to all whose lives she touched. She was... View Obituary & Service Information

The family of Carol Lynn Fleming created this Life Tributes page to make it easy to share your memories.

It is with profound sadness the family announced the passing...

Send flowers to the Fleming family.