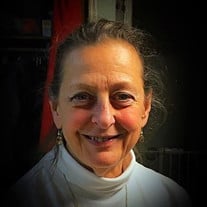 Carole Christine Mahoney was a caring partner, mother, grammy, sister, and friend. She left this world June 3 while in hospice care in Carolina Forest, Myrtle Beach, SC, after a 3rd battle with cancer since 2015 (uterine, breast, and an aggressive lung cancer that metastasized to her brain ultimately causing her unexpectedly rapid demise). Her daughter, Maggie, was with her when she peacefully passed. Carole was born to Ceaser and Clara (Veratti) Fantini on January 1, 1949. She was raised in Philadelphia and the greater Washington DC area. She was a great student and had many interests, extra curricular activities, and pursuits, such as track and field, theater, piano, and horseback riding. She attended Purdue University, East Tennessee State University, Western Kentucky University, the University of Southern Maine, Emerson College in Boston, MA, and Harvard University. She earned a Masters degree from Tufts University in Medford, MA., and more recently completed most of her coursework toward a Masters in Landscape Design from American University in Washington, DC. An editor and writer for the University of Maryland Global Campus Global Media Center, she also was President of Blue Pencil, LLC, which along with her partner, provided home staging services to upscale home owners wishing to maximize the marketability of their homes. Additionally, in her fascinating employment history, she managed communications for The National Museum of Health and Medicine in Washington DC, the International Center for Research on Women, the Graduate Management Admission Council, the Civil War Preservation Trust, and served as Constituent Communications Manager for a United States Senator. Earlier in her professional life she was a drive time radio personality in Maine, New Hampshire, and North Carolina, acted off Broadway in New York City, and had her own business, the Peanut Butter Readers which brought the art of storytelling to elementary schools throughout New England. In addition to her native English language, Carole had a working knowledge of both French and Italian. She enjoyed traveling internationally including trips to England, France, Switzerland, Italy and Cuba. She considered herself to be somewhat of a Francophile, loved her pet cats, The Beatles, cooking, entertaining, fancy shoes and clothes, taking walks, and Christmas! Saying mom was a hoarder of all things Christmas (decorations, bows, ribbons, and crafts) may be an understatement; but the fact that her Christmas items now nearly fill a 10X14 storage unit suggests otherwise! She “really, really, really, really” loved Christmas. She especially loved to wrap gifts and hand craft the fancy bows. She loved to make things special and “festive” — and she always did! To be clear, Carole did not want to have a funeral, nor did she want most people to know she was ill while holding onto survival. She wanted “joy” and happiness for herself and others. Her general joie de vivre over the past few months had been through delicious food, snacks, popsicles (black cherry to be exact), ice cream (raspberry chocolate chunk to be exact), music, movies, and talking to friends and family (mostly ‘face-timing’ to be exact). Her partner Bill cooked Carole breakfast regularly - they always took their meals together, talking for hours (mostly Carole talked to be exact, with Bill the loving and engaged listener). Maggie prepared and cooked supper and concocted many snack foods so that Carole had something that was delicious nearly every day without having the same supper twice. The other days, Carole had take-out from her favorite foods (Chinese, steak, or fish)… oh yes, and a cheese steak. In the last months, even when most language was gone in the last days - you could see and hear the joy and “yum-yum” from the simple pleasure of the taste of something wonderful. Through all that happened, and undoubtedly now, Carole would agree; “Joy is the infallible sign of the presence of God.” — Pierre de Chardin. Carole was preceded in death by her parents. She is survived by her devoted partner of 26 years, William Dodson of Myrtle Beach, SC; daughter, Maggie Bohannon (John Klug) of Minot, ND; sister Jackie (Tom) Cox, of Myrtle Beach, SC; grandchildren, Kenneth Tygart, McKenzie (Chris) Biles of Minot, ND; nieces, nephews, and great nephews, Jason, Jeff, Jen, Joey, Nick, and Tyler). Carole was especially proud to be a great grandmother to Wade Biles, and his little sister, due in September, who will carry a middle name in her honor. There will be celebration of life gatherings in South Carolina, Maine, and North Dakota to be announced at a later date.

Carole Christine Mahoney was a caring partner, mother, grammy, sister, and friend. She left this world June 3 while in hospice care in Carolina Forest, Myrtle Beach, SC, after a 3rd battle with cancer since 2015 (uterine, breast, and an aggressive... View Obituary & Service Information

The family of Carole Christine Mahoney created this Life Tributes page to make it easy to share your memories.

Send flowers to the Mahoney family.