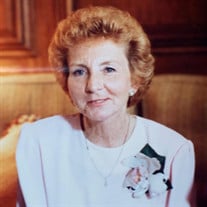 Carolyn Craig, wife of the late Larry Craig, passed on June 29, 2020. Carolyn was born in Lowell, Indiana. She was the daughter of Mertie and Floyd Dickensheets of Lowell Indiana. Carolyn attended Cosmopolitan Music College in Chicago, Illinois majoring in Piano Performance. She taught piano at Dormagen-DeCamp Music Conservatory in Hammond, Indiana and privately in her home for a total of 52 years. She served as a church organist for more than 67 years. Carolyn was employed as Secretary of the Chamber of Commerce in Crown Point, IN before she and her husband moved to Surfside in 1981. Carolyn owned Executive Services, a secretarial service in Myrtle Beach, from 1985 to 1992, worked as a paralegal in two law firms, and retired from Lakewood Camping Resort as Corporate Secretary in 2015. She was an active member and organist of First Church of Christ, Scientist in Myrtle Beach. Surviving are two daughters, Kristy Peters (Nick) of Apex, NC, Kathy Christian (Dean) and grandson Paul of Glen Ellyn, IL; and two sons, Scott Peters (Heather) and grandson Beckett and granddaughter Lexi of West Lafayette, IN; Steve Peters (Amy) and grandson Sam (Katherine) and granddaughter Jessica of Durham, NC; a third son Eric Peters (is deceased) and grandsons Gus and Charlie Peters of Durham, NC; three step-children, Adam Craig (Betsi) and grandsons A.J. and Stephen of Surfside, SC; Marlene Craig of Phoenix, AZ; and Meredith Shuckford (Tim) of Crown Point, IN. In lieu of flowers memorials may be made to First Church of Christ, Scientist, 408 66th Ave. North, Myrtle Beach, SC 29572. A memorial will be announced by the family at a later time.

The family of Carolyn Craig created this Life Tributes page to make it easy to share your memories.

Send flowers to the Craig family.