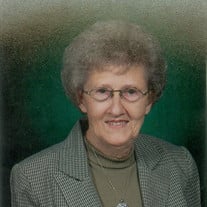 Conway..... Carrie Mae Howell Leviner, age 96 and 7 months, died Saturday, September 28, 2019 at the home of her loving daughter, Judy Leviner Chestnut, with whom she had lived for the last 5 + years. She was born in Conway, SC. She was the wife of the late G.C. Leviner for 57 years. Mrs. Leviner saw herself as a farmer and homemaker. Carrie Mae was the daughter of the late Jesse McKiever and Carrie Nevada Cook Howell and was predeceased by her only son, Jesse Cleveland Leviner and two sisters, Jessie Maude Howell and Estherleen Howell. Also deceased was a grandchild, Wendy Leviner and son-in-law, Butch Chestnut, all of Conway. Surviving are: her daughter, Judy Leviner Chestnut; grandchildren, Christopher Byron Chestnut (Heather) of Landrum, SC, Nichole Chestnut-Boatwright (Jim) of Conway, Jessie Scott Leviner and Kim Leviner Harper (Joe) of Conway, SC, and Jessica Leviner of Alaska. She has 8 great grandchildren, Kaitlyn, Alana, Darci, Claire, Tyler, Andrew, Grayson, and Jessie. Also Gail Leviner, daughter-in-law. Many neighbors, friends, and relatives who will miss her for years to come. One of her favorite things was that she became a sister-in-law to 10 brothers and sisters of her husband G.C. Leviner. Carrie Mae enjoyed being a great gardener and super homemaker with preserving fruits and vegetables, cooking and keeping the home extra clean! Sewing was a favorite and teaching Judy to sew and cook at an early age was rewarding. The family will receive friends from 5:00 until 7:00 PM Monday at Goldfinch Funeral Home Conway Chapel. The funeral will be at 2:00 PM Tuesday at New Hope Missionary Baptist Church with Rev. Lindsay Brown officiating. Burial will follow in Hillcrest Cemetery. The family would like to thank Mrs. Joann Whitlock, Ms. Gail Leviner, and other family members for their great care of Carrie Mae during her illness. Carrie Mae was the oldest living member of New Hope Missionary Baptist Church. She enjoyed her New Hope Church Family very much and The Senior Citizens group also. Once upon a time, she taught Sunday School for the very young children. Memorials may be sent to New Hope Missionary Baptist Church, 5489 Cates Bay Hwy. Conway, SC 29527. Sign an online guestbook at www.goldfinchfuneralhome.com Goldfinch Funeral Home, Conway Chapel is in charge of arrangements.

Conway..... Carrie Mae Howell Leviner, age 96 and 7 months, died Saturday, September 28, 2019 at the home of her loving daughter, Judy Leviner Chestnut, with whom she had lived for the last 5 + years. She was born in Conway, SC. She was the... View Obituary & Service Information

The family of Carrie Mae Howell Leviner created this Life Tributes page to make it easy to share your memories.

Send flowers to the Howell family.