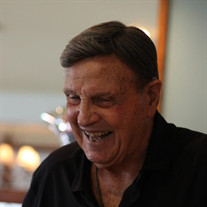 Surfside Beach.... Charles "Charlie" Dirienzo, age 91, after a brief illness, went to be with his Lord and Savior Jesus Christ on January 28, 2021. He was born on April 2, 1929 in Shelton, Connecticut. He was the son of Anthony and Genevieve Pascuzzo Dirienzo. Charlie was proud to have served in both the United States Air Force and the United States Coast Guard. A staunch patriot, he spent his entire career in public service, going on to work for the Connecticut State Police and the Bureau of Alcohol, Tobacco, and Firearms after he served in the military. Upon his retirement from public service, "Mr. D" taught Criminal Justice at Horry-Georgetown Technical College. Charlie was an avid lifelong NY Yankees fan. He was active with the Knights of Columbus and the American Legion. Charlie also enjoyed acting in local theatre productions. He was known for his kindness and generosity and will be deeply missed by all who knew him. Charlie was preceded in death by his beloved wife of 67 years, Marianna Dirizeno; his loving son, James Dirienzo; and his brothers, John Dirienzo and Anthony Dirienzo. Survivors include a son, Charles Jr. and his wife, Melody of Fredericksburg, VA; a daughter, Anna Henry and her husband John of Murrells Inlet; a granddaughter, Laura Henry of Baldwinsville, NY; a grandson, Joseph Henry and his wife Ashley of Greenville, SC; a grandson, James Dirienzo and granddaughter, Kaitlin Dirienzo, both of Round Rock, TX; his brother, Angelo "Dee" Dirienzo of Shelton, CT; and several dear nephews and nieces. In lieu of flowers, the family requests donations to St. Michael Catholic Church. A Mass of the Resurrection will be held, 10:00 AM Friday, February 12, 2021 at St. Michael Catholic Church, 542 Cypress Avenue, Murrells Inlet, SC. Inurnment will be held at a later date in St. Rose of Lima Cemetery in Newtown, Connecticut. Goldfinch Funeral Home, Beach Chapel is serving the family.

Surfside Beach.... Charles "Charlie" Dirienzo, age 91, after a brief illness, went to be with his Lord and Savior Jesus Christ on January 28, 2021. He was born on April 2, 1929 in Shelton, Connecticut. He was the son of Anthony and Genevieve... View Obituary & Service Information

The family of Charles Dirienzo created this Life Tributes page to make it easy to share your memories.