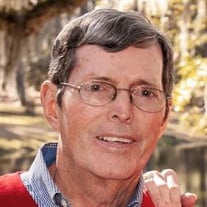 Surfside Beach……… Charles W. Ford, DDS August 16, 1945 - January 13, 2022 Charles W. Ford, 76, passed away at home in Surfside Beach, SC on January 13, 2022 after a long battle with Alzheimer’s disease. Charlie was born in Petersburg, VA to Mr. and Mrs. Kiah T. Ford, Jr. on August 16, 1945. The family moved to Lynchburg in 1947. He graduated from E. C. Glass High School in 1963 and began his undergraduate studies at Hampden-Sydney College, where he was a proud Sigma Nu. During his years at college his friends set him up on a blind date with a Longwood girl, Patricia Diehr. He graduated from H-SC in 1967 and moved to Richmond, VA to study dentistry at the Medical College of Virginia. Charlie and Pat were married in 1969. Upon graduation from medical school, he was an Army Captain serving as a dentist at Fort Gordon in Augusta, GA. Dr. and Mrs. Ford returned to Lynchburg, VA where he practiced dentistry for over 30 years. Upon retirement, Charlie and Pat moved to their beach home in Surfside Beach, SC where they have lived since 1999. A devoted Christian, Charlie was an active member of All Saints Parish in Pawleys Island, serving in Children’s Ministry, ushering, Island Grace Cafe, Lay Eucharistic Ministry and delivering home communion to shut-ins. Charlie is survived by his wife of 52 years, Pat Ford. He is also survived by two beloved daughters, Laurie Ford of Wilmington, NC and Karey Garrison (David) of Madison Heights, VA; grandchildren Peter and Mary Elizabeth, also of Madison Heights; brother Kiah T. Ford, III (Jean) and sister Helen Ford all of Lynchburg, VA; nephews, cousins and friends. Outside his profession in dentistry, Charlie was an accomplished magician. He was a member of the Hill City Magicos in Lynchburg from the time he was a boy until he moved to South Carolina and joined The Grand Strand Magician’s Society. A Memorial Service will be held at 10:00 AM on Monday, January 17, 2022 at All Saints Church, Pawleys Island with the Reverend Robert L. Grafe officiating. Interment will be private in the All Saints Cemetery at a later date. In lieu of flowers, donations may be made in Charlie’s name to All Saints Church at https://www.allsaintspawleys.org/ or mail to the Church address at 3560 Kings River Road Pawleys Island, SC 29585. Goldfinch Funeral Home, Beach Chapel is assisting the family.

The family of Charles "Charlie" Ford created this Life Tributes page to make it easy to share your memories.

Send flowers to the Ford family.