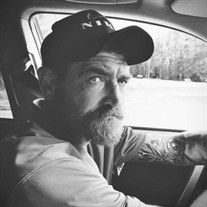 Christopher David Maslanka, age 44, of Conway, SC, passed away on January 11, 2022. Chris was born in Washington D.C. to David and Carol Maslanka Growing up in Woodbridge, Virginia, Chris was active in sports, including football, soccer and hockey. He was an avid fan of the Washington Capitals, the Washington Redskins, the New England Patriots, and of course Tom Brady. He was also a huge Nascar fan, attending races whenever possible and was a lifelong fan of retired race car driver Mark Martin. You could often find him working on cars, and he loved anything to do with Mustangs. Chris also loved going to fish at the piers. He could spend a whole day or evening just trying to catch a bite, but didn't like baiting the hook, and that usually became the job of his wife. He was always passionate about his career as an Electrician. He enjoyed pointing out his work around town because he was so proud to share his work with his family. Chris met "Nina" in 2001 and later married her on May 25, 2004. They share five beautiful children together. He and his family moved to the Myrtle Beach area in 2013. Chris is preceded in death by his grandfather, CSM William Strickland, his grandmother, Lois Strickland, his grandfather Raymond Maslanka, and his bonus grandfather, Jim Dean and his uncle John Strickland. He is survived by his wife of 17 years, Bonita "Nina" Maslanka, his children: Sarah Maslanka(19), Stephanie Maslanka(18), James Maslanka(16), Audrey Maslanka(15) and Jackson Maslanka(9), his parents, David and Carol Maslanka, his sister, Susan Maslanka-Helbert, his paternal grandmother Marjorie Dean, his nephews, Zack Hammers, Tyler Helbert, and Justin Helbert, and bonus grandmothers, Betty Strickland and Connie Maslanka, and his Aunt "Mo" Maureen Strickland, as well as his extended family that include his other aunts, uncles and cousins. To honor his memory, a service will be held on January 29, 2022. Visitors may come by from 1:00 pm until 3:00 pm followed by the service at 3:00 pm until 4:00 pm. This will be held at Goldfinch Funeral Home at 325 Hinson Drive, Myrtle Beach, SC, 29579.

Christopher David Maslanka, age 44, of Conway, SC, passed away on January 11, 2022. Chris was born in Washington D.C. to David and Carol Maslanka Growing up in Woodbridge, Virginia, Chris was active in sports, including football, soccer and... View Obituary & Service Information

The family of Christopher David Maslanka created this Life Tributes page to make it easy to share your memories.

Send flowers to the Maslanka family.