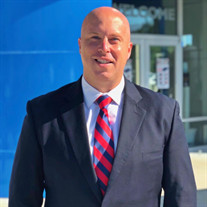 Christopher Andrew Peterson, a long time resident of Myrtle Beach, SC passed away August 24th, 2021 at Tidelands Waccamaw Hospital in Murrells Inlet, SC. His family was able to be by his side as he passed. He was just 35 years old. Born August 4, 1986 in Manassas, Virginia, he graduated from Manassas Park High School in 2004. He played football his entire high school career and his team earned The Virginia State Championship title. He then went to James Madison University, where he completed 3 years of college before having to leave school early after losing his dear mother far too early to cancer. It was at JMU where he met the love of his life, Danielle Anita Arnold in 2006. After both leaving JMU to tend to his mother’s estate, they decided to move to Myrtle Beach, SC and were soon married by the beach on August 18, 2007. They were blessed with their first baby girl, Charlotte Alexis, on February 4, 2008. A few years later, they welcomed their next baby girl, Lilah Brielle, on July 30, 2011. Christopher worked for Horry County Police Department for many years before switching careers to sales at East Coast Honda. He started as a salesman, then worked his way up to internet sales, then promoted to internet sales manager and then finally being promoted to his dream job of finance manager. Christopher always wanted to be the best and to succeed and those were a couple of the many reasons why he climbed the ladder at East Coast Honda. He took great pride in his work and loved his job and he was great at it. Christopher loved everything about life. He had an infectious smile that could light up any room. He loved to make anyone and everyone laugh at all times. He had a talent of making anyone feel happy no matter the circumstance. He had a love for music that started at a young age from his parents who would DJ and shared their love of music with him. That love of music was then passed on to his two daughters and some of their fondest memories include driving to cheer on Thursdays listening to music with their daddy and playing “Guess who sings this song.” Another passion of his was any and all things Disney. He loved visiting Disney World multiple times a year with his family and even would watch YouTube vlogs of Disney at home on a regular basis. One of his favorite moments is walking down Main Street at Magic Kingdom towards the castle with scents from the confectionary filling the air. Christopher also loved all things sports. Being raised in Northern Virginia, he loved all Washington D.C. sports: Washington Redskins, Washington Capitals, Washington Wizards, and Washington Nationals. He also loved watching Manchester United soccer, USC football and UNC basketball. Some of his favorite hobbies included: golfing, swimming in his backyard pool, traveling and discovering new places, fantasy football, attending sporting events, taking care of his yard and plants, grilling on his Traeger, cooking with his daughters, going to the beach with his family and going to concerts. Christopher’s entire world was his wife and two little girls. He worked hard and made sure to provide them with anything they could ever want. There was no greater joy to him, than making his girls happy and making sure they knew how much he loved them. He was the epitome of the ultimate cheer dad. He would try his hardest to be at every cheer competition and was always the first one that would run to them after coming off the competition floor. If he wasn’t able to be at the competition he would make sure to know their compete time and would be waiting impatiently for a video of their routine. He lived and breathed his daughters’ passion and loved to watch them grow and succeed at the sport they loved. Christopher is survived by his wife Danielle, his two daughters Charlotte (13) and Lilah (10), 4 dogs (Elsa, Olaf, Kylo, and Ramsey) and 2 cats (Marshmallow and Cocoa). He is also survived by his father Geoffrey and step-mother Laura Peterson, Father and mother-in-law John and Cynthia Arnold and brother-in-law John (Cortney) Arnold, nephew Charles and niece Emmalynn. Also survived by aunt, uncles and cousins. Christopher is preceded in death by his mother Peggy Staples Peterson and both his maternal and paternal grandparents. A celebration of life service is scheduled for Sunday, September 12th at Goldfinch Funeral Home Beach Chapel at 2 P.M. in Murrells Inlet, SC. In lieu of flowers, please donate to the family’s GoFundMe page which can be found on their Facebook pages under Danielle or Christopher Peterson.

Christopher Andrew Peterson, a long time resident of Myrtle Beach, SC passed away August 24th, 2021 at Tidelands Waccamaw Hospital in Murrells Inlet, SC. His family was able to be by his side as he passed. He was just 35 years old. Born August... View Obituary & Service Information

The family of Christopher Andrew Peterson created this Life Tributes page to make it easy to share your memories.

Send flowers to the Peterson family.