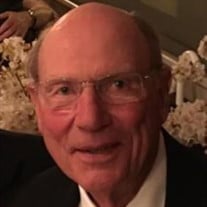 Clarence “Casey” Theodore Darrah Jr died peacefully in Murrells Inlet, SC on February 4, 2022 at the age of 91. Casey is survived by his loving wife Lenore, three sons, Scott, David, Todd and their spouses, his 2 stepdaughters Sharon Bossidy and Jill Wauters and their spouses,13 grandchildren and 2 great grandsons. He is predeceased by his son Craig Darrah, and sisters Elizabeth Jimmerson and Patricia Aladeen. Casey was born on March 28, 1930 in Warrensburg, Missouri to Clarence T. Darrah Sr and Bessie Maude Bethel during the Great Depression. Always athletic, Casey played three sports in high school and was recruited by the Yankees at age 17 to play in their minor leagues. His successful baseball career was cut short when he was drafted into the US Army. After spending 2 years in Japan working for the CIA, Casey returned home, earned a college degree and joined IBM where he worked in Human Resources for 28 years. Casey and Lenore moved from Ridgefield, Connecticut, to Litchfield Country Club in 1989 and then to Watchesaw Plantation in 2000. Casey was a man who loved his family, life, golf (routinely shooting his age), the Yankees and telling stories. He had the ability to draw friends and strangers in with his warmth, sense of humor and genuine interest in others. He was a loving, caring father and grandfather. His grandchildren considered him an icon and proudly bragged about “Grandpa Casey” to all of their friends. A celebration of life will be held on Friday, February 11, 2022, where the family will receive friends from 5:00 to 7:00 PM at Goldfinch Funeral Home on 11528 Highway 17 Bypass, Murrells Inlet, South Carolina. In lieu of flowers, please send donations to Doctors Without Borders at www.doctorswithoutborders.org. Goldfinch Funeral Home, Beach Chapel is in charge of the arrangements.

The family of Clarence "Casey" Darrah Jr. created this Life Tributes page to make it easy to share your memories.

Send flowers to the Darrah family.