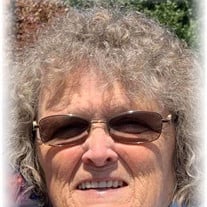 Conway Mrs. Colleen Pelchat, aged 68 years passed away April 10, 2020 peacefully at her home in Conway, SC with her loving family by her side. Mrs. Pelchat is survived by her husband Michael J.M., and 2 sons Christopher M. and Timothy M. Pelchat. Colleen is also survived by her brother Robert Andrews of Trumbul and sister in law Julie Andrews of Darien, Connecticut. Colleen is also survived by 3 grandchildren, Matthew, Kaitlyn and Aidan, her niece Deborah (DL) and nephews Gered and Joshua. Arrangements are being made for a memorial service that will be announced at a later date and time. In lieu of flowers or donations to the family, please consider donating to the (Disabled American Veterans) DAV Chapter 57, 3457 Kates Bay Highway, Conway, South Carolina 29527. Michael and Colleen shared a home on Kates Bay Highway for 15 years having relocated from Stamford, Connecticut in 2005. Mrs. Colleen in her early years attended Saint Mary's School until such a time as she transitioned over to Stamford High School. Colleen was a feisty tom boy always running around with the others in her group that were considered at the time to be 1960s Hippy types. Colleen wore her leather vests with bangles and beads and extremely long straight blond hair. By 1969 Colleen found herself with several thousands of other teens and young people out on Yasgur's Dairy Farm at the Woodstock Music and Art Fair. Shortly afterwards, Colleen began her working career at Southern New Telephone Company with her mother on a switchboard. Later she took on a position with Courland Gardens as an Aide working with convalescents. By 1973 she met Michael and they were married at Saint Mary Chapel with many friends and family in attendance. Colleen insisted on a home wedding reception. Christopher was born in 1974. By 1978 Colleen delivered her second son, Timothy. Shortly thereafter, Colleen started working at the Saint Joseph Medical Center as a switchboard operator. Over the years Colleen advanced to becoming the Communications Supervisor for the hospital. In time Saint Joseph Hospital was sold to the Stamford Hospital System and Colleen transitioned to the communications department at the Stamford Medical Center and worked there for several years as an operator. In time, she assumed the role of Communication Supervisor for Stamford Hospital and retired in December of 2004. Both Michael and Colleen retired in 2005 and spent nearly a year travelling in their motorhome all over the United States in support of the Workhorse Chassis Company as Ambassadors. Michael and Colleen later purchased their 1st home in Conway, SC and by October of that year took up residency. Both Michael and Colleen travelled in their motorhome for 5 more years in support of Workhorse until the company shuttered in 2010. Michael and Colleen continued to travel and support multiple RV groups such as FMCA, Good Sam Club, iRV2, Workhorse Club and several others. Over the years since, Michael and Colleen made many close friends in person and in social networking and enjoyed their retirement together. Colleen very much enjoyed her Carolina Room and would go and sit, read her paper and books and enjoy other activities in the warm sunshine from the comfort of her rocking chair. Colleen always had a zest for life and on the road adventures. She was a strong and loyal friend having made several lasting relationships with the persons whom she met or knew here in Conway. Colleen was a beloved wife and mother who will be sorely missed by both her family and friends. Instead of grieving her loss we would ask that you celebrate her life and her love for everyone. Colleen wants to share with you to always "Live, Love and Laugh". Please sign the online guestbook at www.goldfinchfuneralhome.com Goldfinch Funeral Home, Conway Chapel is serving the family.

Conway Mrs. Colleen Pelchat, aged 68 years passed away April 10, 2020 peacefully at her home in Conway, SC with her loving family by her side. Mrs. Pelchat is survived by her husband Michael J.M., and 2 sons Christopher M. and Timothy M.... View Obituary & Service Information

The family of Mrs. Colleen Laughlin Patricia Andrews Pelchat created this Life Tributes page to make it easy to share your memories.

Send flowers to the Pelchat family.