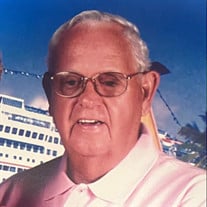 Conway&#8230; Columbus "JR" Phipps, Jr., age 82, passed away Saturday, May 1, 2021. Mr. Phipps was born in Jenkins, KY a son of the late Columbus Phipps, Sr. and the late Elsie Mullins Phipps. He was a welder and journeyman with the NASA Research... View Obituary & Service Information

The family of Columbus "JR" Phipps, Jr. created this Life Tributes page to make it easy to share your memories.

Send flowers to the Phipps family.