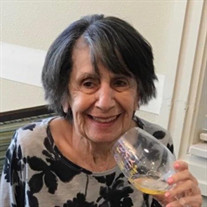 On Friday, March 26, 2021, Constance Klimash, passed away peacefully at home at the age of 86 and is now reunited in heaven with her husband, Walter, of 65 years. Connie was born on April 11, 1934 in Endicott, NY to Peter and Irene (Nicholas) Hronis. Connie was a graduate of Union Endicott, Class of 1952. She attended Harper College and Ridley Lowell. Throughout her career as an Administration Assistant, she worked for several businesses such as General Electric, BAC Insurance Agency, and Bearsch Compeau and Associates. On October 17, 1954, Connie married the love of her life, Walter and together they raised two daughters. Connie had a life long passion for sewing. She could be found burning the midnight oil making clothes for her children, her grandchildren and herself, as well as sewing home furnishings such as draperies, bedding and upholstery. Connie participated in several bowling leagues, finishing up on a team alongside her mother and sister. Connie and Walt shared a passion for reading and golfing. Upon retiring to Myrtle Beach, SC in 1998, she joined weekly leagues where she achieved her once in a lifetime hole in one. Connie was a faithful worshipper of the Dormition of the Virgin Mary Russian Orthodox Church in Binghamton, NY and St John’s Greek Orthodox Church in Myrtle Beach, SC. She was an active church member, enjoying many years as member and treasurer of Philoptochos, served as Church Hall Manager for banquets and weddings, and relished her role in many Fall and Greek Festivals. Connie embraced her Greek heritage. Combining it with Walt’s Russian Orthodox traditions, she created memorable family holiday gatherings. She was happiest when she had those she loved most celebrating together. Connie is survived by her two daughters, Kris Frey (Len) and Karen Soucie (David). She is also survived by her sister, Joanne Battaglini. She was so proud of her 6 grandchildren and adored her 11 great grandchildren. She will be missed by Gary Klimash and Marsha Wisser. A funeral service will be held on Tuesday, March 30 at 11:00am at St John’s Greek Orthodox Church, Myrtle Beach. Burial to follow at Ocean Woods Cemetery. The family would like to express their deepest thanks and appreciation to Crescent Hospice in Murrells Inlet, SC. In lieu of flowers, please consider donations to Crescent Hospice or the Alzheimer’s Association.

On Friday, March 26, 2021, Constance Klimash, passed away peacefully at home at the age of 86 and is now reunited in heaven with her husband, Walter, of 65 years. Connie was born on April 11, 1934 in Endicott, NY to Peter and Irene (Nicholas)... View Obituary & Service Information

The family of Constance Klimash created this Life Tributes page to make it easy to share your memories.

Send flowers to the Klimash family.