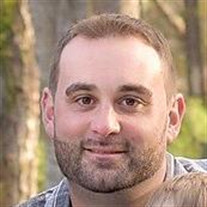 Beloved father, cherished son, adored brother, uncle, cousin, nephew, and friend and respected mentor to many, Daniel (“Danny”) Kjersgaard left this world too early and joined our heavenly Father on Tuesday, December 24, 2019.    Danny was born on March 10, 1985 and would proudly tell you he was New Jersey born and raised, a Yankee fan through and through.  He attended school and graduated St. Rose of Lima Elementary, Christian Brothers Academy, and LaSalle University.  He loved New Jersey and it’s where he met Denise Roselle and her family, worked with them at Suburban Disposal, and started a family of three beautiful children. His life’s story brought him to South Carolina, where he met Tia Robison and became a dad again.  His children were his light and his joy and he once dared anyone to challenge his status as “the luckiest man in the world.” Obituaries are supposed to summarize one’s life and it would be disingenuous to try to capture Danny’s story without mention of his struggle with addiction.  Some people may have looked at him, especially during his bad times, and dismissed him as an addict or a junkie. What a loss for them to miss out on having the gift of Danny in their lives.  Danny was one of kindest and most big-hearted teddy bears around. He was immeasurably generous - the kind of guy who’d give a stranger the shirt off his back to help them. He was indescribably humble and non-judgmental; he defined the very essence of what it means to be down to earth. He lived a simple life. He believed in 3 things: “Trust God, Clean House, Help Others.” He didn’t have much, but he never cared about material possessions or what other people thought of him. He was a “working man,” and loved being outdoors and helping people - whether it was with their yards, their homes, or their trash. He was excited to launch his own business and grateful for the opportunity to work with his closest friends, putting in an honest day’s work for an honest day’s pay.  He was happiest with his kids and surrounded by his squad, his tribe, the people who supported him and those who he supported. Family Over Everything, that’s what he believed.  He was youthful but wise, hilarious and sarcastic. In Danny’s own words: “He was a great man, with a huge heart, he just wanted to help people. He left us too early.” This world could use a lot more people like Danny. Danny didn’t ask for this disease - his addiction. He hated it with everything in him. He hated what it did to his family and friends, and all the families the disease affected. He prayed that “people started to treat addiction for what it is: a life and death matter.” Over the last several years, he worked the program. He rose among those who are involved in this fight. He trusted God and committed himself to a life of helping others.  There was nothing he wouldn’t do to save someone else fighting this addiction, to help another person avoid a relapse, to assist in trying to get someone clean.  He attended conferences and retreats, spoke at meetings and made it his life’s goal to grow the HA fellowship.  He gave out his phone number to strangers, hoping they’d reach put if they needed help.  He wanted to save people, and more than anything else, he wanted to end the stigma and shame associated with addiction.  He didn’t want to go to any more funerals.  He was 11 months clean when he relapsed, on a final, tainted dose that claimed his life, but finally freed him from his suffering and pain.  Daniel is survived by his children, Olivia, Layla, and Brody Kjersgaard and Oliver Robinson; his parents, Sharon and Denis Kjersgaard; his sisters, Laurie McLendon and Kelly Hayes and their children; and his aunts, Carol Vandemark and Wendy DuBois, and cousins, as well as their children.  He is predeceased by his grandparents, Edward and Margaret Kjersgaard.   Please join us at a visitation on Monday between 6 – 8 PM at Goldfinch Funeral Home in Pawleys Island and a memorial service honoring Danny’s life on Tuesday, December 31 at 10:30 am at Pawleys Island Community Church. A celebratory reception will be held at his sister’s home in Pawleys immediately following the mass.  In lieu of flowers, please consider paying it forward instead. Reach out, support someone who is struggling with addiction, and share his message. End the stigma. Educate your children about how deadly and unimaginably devastating it can be. A memorial fund is being established and will be announced shortly. If you are fighting an addiction, please listen to Danny’s words, we hope they save your life. “There is hope. If you are struggling, reach out to somebody. Don’t be ashamed. Trust and rely on your God, let him show his love for you.” We take comfort in knowing that Danny is finally flying high, lifted by God’s love and compassion, free from the struggle that haunted him. We are heartbroken that he is no longer physically with us, but he will live in our hearts forever. We hope that anyone reading this will continue to carry on the message that Daniel so generously did.

The family of Daniel Kjersgaard created this Life Tributes page to make it easy to share your memories.

Send flowers to the Kjersgaard family.