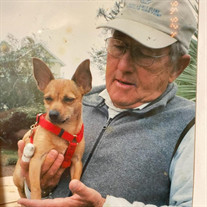 D. Ronald Hufford David Ronald Hufford of Georgetown, South Carolina passed away peacefully at his home on February 27, 2022. Ron was born in Perrysburg, Ohio on December 11,1934 to Gertrude (Best) and Joseph Hufford. He graduated from Perrysburg High School in 1953. Ron joined the Marine Corps in 1954 and served until 1957. In 1954 Ron married Shirley Sue Sarver and had three children Brian, Anita, and Lisa. Ron and Carollynn Bembenek married in 1985. This began their 36 year journey as partners in marriage, friendship, business and as grandparents. Ron was owner of Hufford Construction where he worked at the furniture market in High Point, North Carolina for years. Ron enjoyed golf, the ocean, fishing, his front porch, playing cards, Johnny Cash music, traveling, working in his yard, practical jokes and placing bets, his children, and grandchildren. He taught all the importance of hard work and common sense. Ron is survived by his wife Carol and dog Mack, sister Amelia Schute, and children Brian (Lynn) Hufford, Anita (Bob) Kolvey, and Lisa Jones (Roosevelt Nix). Ron's commitment to relationships with his grandchildren was above and beyond. The trips, experiences at the beach, and shared life events are special to all. Memories of Papa will be treasured by Steve (Shannon) Hufford and great-grandchildren Lilah and Logan, Eric (Emily) Hufford, Alyssa Kolvey, Zachary Kolvey, Meredith Kolvey, Rosie Nix, Jalen Jones, and Keela (Ryan)Mackley. Those wishing to make a memorial contribution are asked to consider the animal rescue organization All 4 Paws at 708 Petigru Drive Pawley's Island, SC 29585. A Celebration of Life service is planned for May 7th in Georgetown, South Carolina. At that time, 87 years of stories and memories will be shared. Goldfinch Funeral Home, Beach Chapel is honored to assist the family.

D. Ronald Hufford David Ronald Hufford of Georgetown, South Carolina passed away peacefully at his home on February 27, 2022. Ron was born in Perrysburg, Ohio on December 11,1934 to Gertrude (Best) and Joseph Hufford. He graduated from Perrysburg... View Obituary & Service Information

The family of David Ronald Hufford created this Life Tributes page to make it easy to share your memories.

Send flowers to the Hufford family.