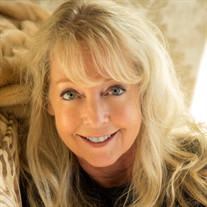 Denise Clarice Mullen of Myrtle Beach, S.C., passed away May 13, 2021, at her home surrounded by her husband and sister. She was born June 29, the year a closely guarded secret, for she never let it be known her actual age. She was the daughter of Melville and Lois Mullen of Keswick, Ontario, Canada, who preceded her in death. In addition to her devoted husband, James Mulvanerton, she is survived by her sister Jeanette Mullen-Johnson (Jeff ) of Draper, Utah; her brother Todd Mullen of Keswick, Ontario, Canada; Uncle Raymond Blouin of Aurora, Ontario, Canada; as well as nephews Derek Martin, Mark and Mikel Mullen, Ryan, Kevin and Conor Mulvanerton, niece Kaylee Gleason and Goddaughter Eleanor Salvatore. A joy to everyone who knew her, with her Goldie Hawn appearance and melodious laugh that sometimes fooled others into not noticing her extreme intelligence, sharp wit and gift for description. But she was also profoundly spiritual and had a gift for helping her friends stay positive, change the lens of their focus and see the bigger picture. You could not ask for a more loyal, loving and authentic friend. Even despite her battle with cancer, she continued to send encouraging texts to others in the battle to keep fighting. She presided over the Myrtle Beach Jaycees in the early 1990s, growing the organization and leading it to national recognition. She was the first female president of the local chapter, she also started a weekly soup kitchen for the homeless at the old Jaycee Hut on Oak Street, which eventually became the Community Kitchen, still in operation. She inspired chapter members to become public speakers, astute managers and humane citizens by noticing and bringing out the best in each of them. Under her leadership, local residents won national recognition in public speaking, chapter organization and management. She was honored with The Sun News Volunteer of the Year award in 1989. She also coordinated a new rape crisis center through the Waccamaw Center for Mental Health and later was director of public relations. Her next career adventure was as executive director of the Long Bay Symphony. She then worked in the marketing department and magazine division at The Sun News for several years. She was also a contributing editor for Grand Strand Magazine for nearly a decade. She was an excellent writer, speaker and communicator with her unique flair with words and sense of humor. She freelanced extensively, and was former author of The Insider’s Guide to Myrtle Beach and the Grand Strand. She also wrote a novel. She met her husband, James, in the Jaycees in 1990 and they married in 1994 at Saint Andrew Catholic Church. Denise also gave her husband the nickname which would be made famous locally as it is also the name of his bar and restaurant — Magoo’s Sports and Spirits. She was known for her green wig when celebrating Saint Patrick’s Day with her mother and uncle Ray every year. Denise and James took road trips throughout the US and Canada and enjoyed traveling annually to Key West, Florida, where they made friends with other couples from throughout the U.S. They also traveled to Spain, France and England. She had a knack for interior design and decorated her Christmas trees in glittery bronze colors long before it was popular to stray from the traditional green and red. Plants were always in abundance and flourished in her house. She adored leopard prints and despised televisions in rooms meant for conversation. Her French-Canadian accent and her own modified lingo never left her, and close friends would always understand. Thanks to her knowledge of French, she and her friends developed code words to help one another out of any awkward situations. Early in her life, she studied to become a nurse but was drawn to the theater, where she acted in plays and eventually managed a theater company in Toronto. She graduated from Sutton District High School, Ontario, Canada. She earned an undergraduate degree in psychology and business from Wilfrid Laurier University in Waterloo, Canada. She moved to Myrtle Beach in 1984 and later earned a master’s degree in business from Webster University. Petite and athletic, she remained active and was a life-long fitness and nutrition aficionado. Denise participated in the Myrtle Beach Marathon for many years. She loved to dance and enjoyed many a Mullets concert. She once danced on stage at a Blood, Sweat & Tears concert to the song “Lucretia Mac Evil,” fulfilling her own motto of “Life is short. Be the first one to hit the dance floor,’’ and “Sing. Dance. And wear red lipstick.’’ A visitation will be held Saturday, May 22, 1-3 pm at Goldfinch Funeral Home, Carolina Forest (325 Hinson Drive, Myrtle Beach, SC 29579), with a service at 3 pm. A celebration of Denise’s life will be held at a later date. Flower arrangements are available through La Zelle’s Flower Shop in Myrtle Beach, lazellesflowers.com, (843) 448-3433, or donations can be made to Shades of Hope Wildlife Refuge, www.shadesofhope.ca (705) 437-4654. To view the service via livestream, please use the following link: https://vimeo.com/553730720/c15a99e681

Denise Clarice Mullen of Myrtle Beach, S.C., passed away May 13, 2021, at her home surrounded by her husband and sister. She was born June 29, the year a closely guarded secret, for she never let it be known her actual age. She was the daughter... View Obituary & Service Information

The family of Denise Clarice Mullen created this Life Tributes page to make it easy to share your memories.

Denise Clarice Mullen of Myrtle Beach, S.C., passed away May...

Send flowers to the Mullen family.