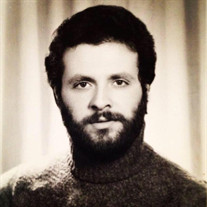 Domenick Piccone, 73, passed away the evening of February 14th, 2021 surrounded by the love of his family and peacefully taking his last breath in the presence of the love of his life, Pauline Helen Tedeschi. Domenick was born in Sulmona, Aquila, Italy, a son of the late Anna Maiorano and Joseph Piccone. He emigrated to the United States of America in the early 60's, and after earning his citizenship, enlisted in the United States Marine Corp. and served 2 years as a Corporal, in country, in Vietnam. After his service, he returned to Italy and in 1972, was introduced to Pauline Tedeschi of Melbourne, Victoria, Australia in the picturesque mountain pass of Passo San Leonardo, Pacentro, Italy. They were married at the Chiesetta di San Leonardo on June 23rd, 1977. Domenick and Pauline emigrated to the United States of America together, in 1977, and settled in Wappingers Falls, New York. In 1978 they opened the Piedmont Restaurant in Millbrook, New York; after 2 years they converted the restaurant to a rock club called the Old Post North. They began their family in 1981 with their first born, a daughter, Lisa Marie Piccone. Their second child, a daughter, Amanda Cristine Piccone was born in 1985 and their third child, a son, Steven James Piccone was born in 1993. In 1982 Domenick began his career as a Correctional Officer with the New York State Department of Corrections. After graduating the academy, he trained in Coxsackie, New York and was then transferred to the maximum-security Green Haven Correctional Facility in Stormville, New York in 1983 and worked there for 8 years. After being promoted to Sergeant, he was then transferred to the Lakeview Shock Incarceration Correctional Facility in Brocton, New York where he then retired from service in 2007 after a total of 30 years in the New York State Department of Corrections system. Domenick and Pauline then moved to Myrtle Beach, South Carolina in 2017 to live out their retirement years in a warmer environment. Domenick was beloved by all that knew him; a dedicated husband, father, and Nonno. Dominick is survived by his wife, Pauline Tedeschi (Piccone); daughters, Lisa and Amanda; son, Steven; granddaughters, Drew and Brynn; brother, Frank Piccone. In lieu of sending flowers, please consider donations to the following organizations that meant a great deal to Domenick. St. Jude's Children's Hospital, https://fundraising.stjude.org/site/TR/GiftFunds/GiftFunds?px=6926727&pg=personal&fr_id=39300 Brookgreen Gardens,https://www.brookgreen.org/memorial-and-tribute-gifts

Domenick Piccone, 73, passed away the evening of February 14th, 2021 surrounded by the love of his family and peacefully taking his last breath in the presence of the love of his life, Pauline Helen Tedeschi. Domenick was born in Sulmona,... View Obituary & Service Information

The family of Domenick Piccone created this Life Tributes page to make it easy to share your memories.

Domenick Piccone, 73, passed away the evening of February 14th,...

Send flowers to the Piccone family.