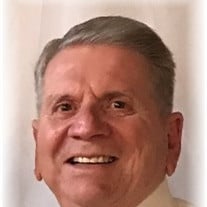 Columbia, SC… Don Byrd, age 81, passed away Monday, February 22, 2021. Mr. Byrd was born in Mullins, SC a son of the late Joel Robert Byrd and the late Jessie Florine Page Byrd. He previously worked with Sears Roebuck for 20 years. Mr. Byrd was currently the owner and operator of Chick-Fil-A, 229 Bush River Road in Columbia, a position he held for 30 years. He was a strong believer in Jesus Christ and was a member of Shandon Baptist Church. He was known for his incredible heart for his family, his team and his Guests, and he had a positive impact on everyone he met. He truly loved caring for his local community and did so each day in style - still wearing his Chick-Fil-A tie. Mr. Byrd was predeceased by one son, Stephen Byrd and one brother, Kenneth Byrd. Mr. Byrd is survived by his wife, Robin Byrd of Columbia, SC; one son, Joel Byrd (Lisa) of Myrtle Beach, SC; two daughters, Allie Finotti (Nick) of Simpsonville, SC and Natali Timmons (Chad) of Mt. Pleasant, SC; one sister, Bobbie Buchanan of Manchester, GA; and six grandchildren, Jorden Byrd (Alyssa) of Princess Anne, MD, Jackson Byrd of Myrtle Beach, SC, Halie Finotti and Micah Finotti both of Simpsonville, SC, Harrison Timmons and Hudson Timmons both of Mt. Pleasant, SC. Services will be private. Due to COVID 19 and social distancing guidelines, please contact the family for service information. Memorials may be sent to Samaritan's Purse, P.O. Box 3000, Boone, NC 28607 or online at www.samaritanspurse.org Please sign an online guestbook at www.goldfinchfuneralhome.com Goldfinch Funeral Home, Conway Chapel is serving the family.

The family of Don Byrd created this Life Tributes page to make it easy to share your memories.

Send flowers to the Byrd family.