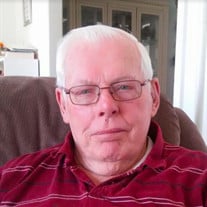 Myrtle Beach .….. Donald Joseph Carney "Don" passed away on Thursday, January 14, 2021, at the age of 86 at his home. Donald was born on July 20, 1934, in Teaneck, NJ to the late Emmett and Edith Zellweger Carney. Don graduated in 1952 from Dumont High School. He was voted "Best All Around Athlete" in High School. He was captain of the football team and the quarterback, captain of the basketball team and point guard and captain of the baseball team and their main pitcher. He was such a good pitcher that the NY Yankees invited him to tryout shortly after graduation. Don proudly served his country serving in the US Army. He was a very hands-on dad and coached all his boys little league teams. He also spent many hours teaching and practicing basketball with his daughter. Don retired from Bergen County Police Department as a Sargent after 30 years of service. He and the love of his life and best friend his wife Jean moved full time to Myrtle Beach in 1992 where they met many good friends and had lots of parties. He loved to golf and would golf 5 days a week. He was a member of the Island Green Men's Golf League, the Island Green Sunday Couples group. He also belonged to a Bowling League and last year at age 85 rolled a perfect 300 game! Don was a lifelong member of the Freemasons, as well as a member of the American Legion and the Elks Lodge. Don was known and will be remember for being fun loving, for his kindness, generosity and for his zest for life and his sense of humor. Don cared greatly about his family and loved them very much. Don is preceded in death by the love of his life his wife of 48 years Jean Marie in 2006; sons Joseph Patrick in 2015 and James Robert in 2016; daughter-in-law Shari in 2014. He is survived by his son, Jeff Carney (life partner Laura) of NJ; daughter, Donna Carney of Murrells Inlet; daughter-in-law Joanne Carney recently of NC; grandchildren Alyssa, Thomas, Nicole and Lucas; special friend Joan Romano and his best buddy of 14 years his cat Pooky who seems lost without him. He will be missed by those who had the honor of knowing him. A Celebration of Life Service will be held at a later date with burial in Massachusetts Veterans Memorial Cemetery. Memorial contributions may be made in his honor to The Marfan Foundation at marfan.org Goldfinch Funeral Home, Beach Chapel is assisting the family.

The family of Donald Carney created this Life Tributes page to make it easy to share your memories.

Send flowers to the Carney family.