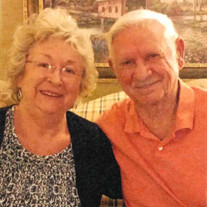 Donald William Miller, 87, of Conway, passed away at his home on January 4, 2021 with his loving wife Barbara by his side. Don was born December 21, 1933 in Albany, New York, a son to the late Daniel and Amelia Miller. He proudly served his country in the United States Army from 1956 - 1958. Don was preceded in death by both of his parents. Don married his wife Barbara on August 19, 1990 and they spent 27 happy years together in Conway. In life, Don was the owner and operator of his own flooring business. He was a faithful member of Christ the Servant Lutheran Church in Conway and was very active within the church. He was also a proud member of the Elk's Club and the Good Samaritan's Club. In his leisure time, Don loved watching the New York Yankees baseball team and was a very big fan. Don also enjoyed playing golf and was an animal lover and all of his pets were rescues. Most of all, he cherished spending time with his family. Don is survived by large and loving family, including his wife of 30 years, Barbara Ann Miller; his son Glenn Donald Miller (Mayra) of Myrtle Beach; his daughter Kitty Joy Thomas (Eddie) of Albany, NY; his step-daughter JoAnne Bacon (Tom) of Cumming, GA, his step-daughter Jackie Burke (Todd) of Rathdrum, ID; his four grandchildren Schyler Miller, Nicholas Olsiewski, Steven Olsiewski and Alexander Olsiewski; his five step-grandchildren, Connor, Tessa and Emma Bacon and Delaney and Sydney Burke; his two great-grandsons James and William Olsiewski; his brother Michael Moroskey (Mary Ann) of Melrose, NY and brother Jerry Moroskey of Latham, NY; his sister Judy Walker (Richard) of Grand Rapids, Michigan and several other extended family members and many friends. A memorial service to honor Don's life will be held at a later date, to be announced by the family. In lieu of flowers, memorial donations can be made in Don's honor to Christ the Servant Lutheran Church, 2105 Highway 501 East, Conway, SC 29526 or to the Horry County Animal Shelter, 1923 Industrial Park Road, Conway, SC 29526.

Donald William Miller, 87, of Conway, passed away at his home on January 4, 2021 with his loving wife Barbara by his side. Don was born December 21, 1933 in Albany, New York, a son to the late Daniel and Amelia Miller. He proudly served his... View Obituary & Service Information

The family of Donald William Miller created this Life Tributes page to make it easy to share your memories.

Donald William Miller, 87, of Conway, passed away at his home...