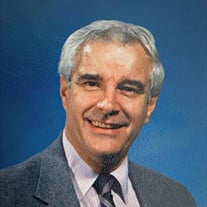 Don Racette, age 84, of Conway, South Carolina lived a full life and passed away Tuesday, surrounded by his wife and three children. He was born on the first day of Summer in Albany, NY on Sunday, June 21, 1936 and left this earth on his mother’s birthday, Tuesday, November 3, 2020. He was the son of the late Raoul and Beatrice (Zollinger) Racette. Don was a 1954 graduate of Vincentian Institute and received his undergraduate degree in Broadcasting in 1958 from Michigan State University. Upon graduation, he chose to enlist in the U.S. Army and served in Fort Greely, Alaska as an Army radio and television program director from 1958-1961. A devoted “Sparty” fan, Don went on to earn his Masters in Speech Education from Michigan State University in 1965 and also started work on his PhD. soon thereafter. On July 28, 1962, Don married his high school sweetheart and the love of his life, Elaine Marie Kokoski. They made their home on Park Avenue in Hadley, NY, where they raised their three children, Mark, Donna, and Debbie. For Don and Elaine, family was everything. As a family, they shared countless inside jokes, made-up songs for pretty much everything, and enjoyed camping in upstate New York, Virginia Beach, VA, and Myrtle Beach, SC. Above all, Don and Elaine were united through a strong faith and love for Jesus Christ, which they shared with their children and grandchildren. Don was a lector and Eucharistic Minister in the Catholic Church and in his later years, accompanied his wife and friends to many senior care facilities to share God’s unconditional love through music. In 1963, Don was recruited by Hadley Luzerne Central School (HLCS) to leave broadcasting full time to teach public speaking at both the middle school and high school levels. His teaching career at HLCS spanned 28 years and he was beloved by teachers, students, and administrators alike. Additionally, he stepped into the roles of director of communications, yearbook editor, and high school play director. During this time, he also worked part time teaching broadcasting at Adirondack Community College and was a program director, talk show host, and disc jockey at WWSC 1450 AM in Glens Falls, NY. In 1997, Don and Elaine moved to Myrtle Beach, SC to enjoy retirement and their shared love of the ocean. A man in perpetual motion, Don continued to teach public speaking for more than a decade on the campuses of Horry-Georgetown Technical College in Myrtle Beach, SC. With a commanding 6’5” frame and notable radio voice, Don was larger than life, both in person with his family and students, and through the airwaves from behind the microphone. He is well known for his unique sense of humor, train chasing with his children and their friends, love of dogs, and penchant for all things 1950s music. A child at heart, Don loved Christmas, ferris wheels, merry go rounds, posing with life-sized costumed characters, and surprising others with meaningful, thoughtful gifts. Even decades after retiring from teaching, his former students consider him a great mentor, who challenged, encouraged, and loved them toward their highest and greatest good. His zest and energy for life was contagious and he was always the life of the party. In addition to his parents, Don is predeceased by his twin brother, John Walter and their older brother, C. Robert “Bob” Racette. Survivors besides his wife Elaine of 58 years, include one son, Mark and his wife, Annie of Omaha, NE and their three children, Ella (16), Colleen (11), and Bobby (8); two daughters, Donna Racette and her boyfriend, Dr. Jonathan Yalowchuk of Boston, MA; and Debbie and her husband, Colonel Kris Barcomb of Lompoc, CA and their three children, Lainey (16), Caroline (11), and Emily (6); and several nieces, nephews, great nieces, great nephews, and cousins. Bravo! for a life well lived, Mr. Don Racette. Rest in peace. Funeral services will be conducted at 1:00pm on Thursday, November 5, 2020 at St. Andrew Catholic Church, 503 37th Ave N, Myrtle Beach, SC 29577. He will receive military funeral honors in a private military burial at the Florence National Cemetery. Those who would like to share a comment or leave a memory with the family may do so in a comment here.

Don Racette, age 84, of Conway, South Carolina lived a full life and passed away Tuesday, surrounded by his wife and three children. He was born on the first day of Summer in Albany, NY on Sunday, June 21, 1936 and left this earth on his mother&#8217;s... View Obituary & Service Information

The family of Donald G. Racette created this Life Tributes page to make it easy to share your memories.

Send flowers to the Racette family.