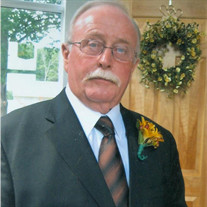 Loris...... Dotson Eugene Owen, age 82, passed away at his residence Saturday, January 1, 2022 following an illness. Mr. Owen was born in Roanoke, Virginia, a son of the late George Bannon and Gladys Ethel Tuck Owen. He was a graduate of Jefferson Senior High School in Roanoke, Virginia. Mr. Owen was an avid golfer, playing in many tournaments throughout his life and was an amateur boxer as a teenager. He served as Sunday School Superintendent at Belmont Christian Church in Virginia and played catcher for the church softball team in the city church softball league. Prior to retirement, he was Purchasing Manager at Mohawk Tire Company in Virginia and then served as the City Administrator for the City of Loris after moving to Loris, and a self-employed insurance agent. As a young boy, he delivered milk with his uncle for Garst Brothers Dairy in Virginia. He was Past President and Lifetime Member of the Jaycees in Salem, Virginia. Mr. Owen was a US Army veteran and was first stationed at Fort Monroe in Virginia. He had also worked at Hammer Mill in Virginia as an Assistant Purchasing Agent. In recent years, he worked with Bill Ward's Used Cars and Goldfinch Funeral Home in Loris, SC. He was a proud active member of The Sons of Confederate Veterans until declining health. Mr. Owen was a member of New Home Baptist Church and Gideons International. He will be remembered as a loving Christian father and husband. Surviving are: his wife, Myrtle Holmes Owen of Loris; one son, Steve Owen of Charleston, SC; three daughters, Tami Hines (Toby) of Salem, Virginia, Jamie Mishoe and Jolie Sarvis, both of Loris, SC; grandchildren, Zachary Hines, Matthew Hines, and Ashley Jewell, all of Salem, Virginia, Clinton Mishoe of Myrtle Beach, Emily Mishoe and Dylan Walters, both of Loris, Savanna Mishoe of Conway, and Daniel Walters of Murrells Inlet; two great grandchildren, Kherington Jewell and Langstan Jewell; his brother, Durward Owen of Charlotte, North Carolina; and his first wife and mother of Tami and Steve, Carol Roberts of Salem, Virginia. Funeral services will be held at 3:00 PM Tuesday from New Home Baptist Church with Rev. Myron Pritchard and Rev. Michael Lee Officiating. Burial will follow in the church cemetery. The family will receive friends in the church sanctuary from 2:00 until 2:45 PM Tuesday. Memorials may be sent to New Home Baptist Church, 1675 Hwy 139, Conway, SC 29526. Sign an online guestbook at www.goldfinchfuneralhome.com Goldfinch Funeral Home, Loris Chapel is in charge of arrangements.

Loris...... Dotson Eugene Owen, age 82, passed away at his residence Saturday, January 1, 2022 following an illness. Mr. Owen was born in Roanoke, Virginia, a son of the late George Bannon and Gladys Ethel Tuck Owen. He was a graduate of Jefferson... View Obituary & Service Information

The family of Dotson Eugene Owen created this Life Tributes page to make it easy to share your memories.

Send flowers to the Owen family.