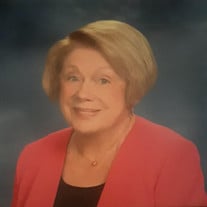 Conway... Dottie Skipper Calder, age 87, passed away on Monday, January 10, 2022 at her home in Conway, SC surrounded by her loving family. Dottie was born on March 28, 1934 in Conway and was raised in the Juniper Bay section of Horry County, the daughter of the late George H. and Lula S. Skipper. After graduating in 1951 from Conway High School, she married Lamar Calder and began life as a Marine Corps wife. Upon Lamar's retirement from the military, the family settled in Conway, SC where she and Lamar began a career as owners and operators of PCW Appliance Sales and Service in Myrtle Beach. Dottie was a member of North Conway Baptist Church and the Winsome Sunday School Class. She adored her role as a mother, grandmother, and great grandmother. She is survived by her son Johnny Calder (Janet), a daughter, Michelle Sanders (Ford), and a son-in-law, Jerry Britt. Seven grandchildren also survive including Jarrett Calder (Marion), Joshua Calder, Jennifer Calder, Jeremy Britt, Marybeth Flack (Ben), Jonathan Britt (Rachel), and Jacob Sanders, along with great grandchildren, Brantley Flack and Braelyn Flack. Her sisters, Lou Culler (Arthur) and Ethel Davis (Bobby), a sister-in-law, Pat Skipper, and numerous nieces and nephews. Dottie was preceded in death by her husband, a daughter, Gayle Calder Britt, and siblings, Ruby Godwin (Mack), Dock Skipper (Clarice), Kelly Skipper, Oliver Skipper (Gladys), George Skipper, and Carrie Best. Services will be held on Saturday, January 15, 2022 at 1:00 at the Goldfinch Funeral Home Chapel, 606 Beaty Street in Conway. Burial will follow at Free Worship Freewill Baptist Church Cemetery at 5205 Hampton Road in Conway. Visitation with the family will be held one hour prior to the services at the funeral home. To view the funeral service via livestream, please click the link below. https://vimeo.com/665355582 Memorials may be made to the Pulmonary Fibrosis Foundation using the direct link https://app.mobilecause.com/vf/PFFTribute/DottieCalder or by mail at the address below, Pulmonary Fibrosis Foundation, 230 East Ohio Street, Suite 500 Chicago, IL 60611. Please sign the online guest book at www.goldfinchfuneralhome.com Goldfinch Funeral Home, Conway Chapel is in charge of the arrangements.

Conway... Dottie Skipper Calder, age 87, passed away on Monday, January 10, 2022 at her home in Conway, SC surrounded by her loving family. Dottie was born on March 28, 1934 in Conway and was raised in the Juniper Bay section of Horry County,... View Obituary & Service Information

The family of Dottie Skipper Calder created this Life Tributes page to make it easy to share your memories.

Send flowers to the Calder family.