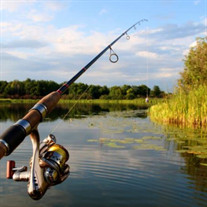 Elbert A. Cribb, Jr., 80, of Socastee, received his crown of righteousness after leaving his earthly home on Wednesday, September 16th, 2020 surrounded by his beloved family. Elbert “Jr.” Cribb was born on January 22, 1940 in Conway, South Carolina. He was the eldest of five siblings born to the late Elbert Anderson Cribb, Sr. and Lillie McLain Cribb. As an avid fisherman, he enjoyed much of his free time casting lines in his “secret fishin’ holes”, only sharing those spots with a select few. He would use this time to fellowship, whether it was with his sons, grandchildren, close friends, or just alone with God. Though he spent many years as an angler, he considered his greatest and most successful “catch” to be his childhood sweetheart, best friend, and wife of 61 years. After retiring from Santee Cooper in 1995, he enjoyed some time traveling across the United States with his wife, visiting family and friends while exploring some of God’s most unique landscapes. A later trip to the Holy Land was another great highlight of his travels. Though his travels made for lasting memories and great stories to be told, he loved nowhere better than to be at home with his family. He was a great storyteller and full of Godly wisdom. It was evident that he wanted to ensure the education, security and salvation of his loved ones. Above all, he loved his Lord and Savior Jesus Christ whom he served most all of his life. He was a member of Socastee Family Worship Center where he attended before his illness. He never ceased praying and joyfully awaited the day when he would be in the presence of his Savior. He is survived by his wife of 61 years, Louise Bellamy Cribb; his 2 sons, Randall Cribb (Hollie) and Dwayne Cribb (Sandra); his six grandchildren, Nicholas Cribb (Michelle), Harrison Cribb, Haley Dickinson (Jonathon), Kindall Cribb, Zachary Greppi and Christopher Greppi; a great-granddaughter to be born, Keilah Cribb; a brother, Jerry Cribb (Kathy); Sisters, Betty Powell and Joanne McCarson. He was predeceased by his parents and a sister, Elaine Sessions. Services will be held on Sunday, September 20th at 11am at the open air mausoleum at Hillcrest Cemetery located at 1000 Hwy. 544 Conway, SC. Goldfinch Funeral Home is in charge of the arrangements. 2 Timothy 4: 7-8 I have fought a good fight, I have finished my course, I have kept the faith: Henceforth there is laid up for me a crown of righteousness, which the Lord, the righteous judge, shall give me at that day: and not to me only, but unto all them also that love his appearing.

The family of Elbert A Cribb Jr created this Life Tributes page to make it easy to share your memories.

Send flowers to the Cribb family.