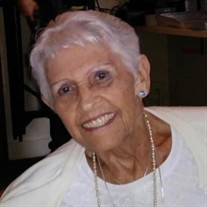 Eldora (Dorie) Ann Davis, 87, of Myrtle Beach, South Carolina, passed away April 2, 2020. Dorie was born in Dunseith, North Dakota on November 10th, 1932, to the late Ernest J. and Fern Horsman. They moved and settled in Seattle/Ballard Washington where she met the “Love of Her Life” and high school sweetheart, Wayne E. Davis, (Colonel, USAF Retired). They Married March 22, 1952 and spent 64 happy years together until Wayne passed away March 5, 2016. They traveled the world together while in the US Air Force including assignments to Japan and Turkey and their final two assignments were Moody Air Force Base, Valdosta, GA, and Myrtle Beach AFB, SC, where they retired in 1985, and settled to be with and among their - what would turn into many, grand and great grand-children. Dorie came from a large family of five sisters and one brother, whom she loved dearly. She & Wayne were then blessed with their own large family that they poured their love into during their time here on Earth. They were role models to so many friends and families over the years…loving each other and visibly just setting the bar for what is truly important in life. She would be the first to tell you that her family meant everything to her. Yes, a true blessing she has been. Loved by family and so many others, she was an inspiration and gift to all who had the honor of being in her presence. Dorie is survived by her sister Eunice (Horsman) Marshall, one Daughter, Deanna (Ron) Dendy of Murrells Inlet, SC; five Sons, John (Cathy) of Chapin, SC; Mike (Terri), Rick (Stephanie) all of Murrells Inlet, SC; Brad (Tammie) of Myrtle Beach, SC; Gerald Mitchell of Suwanee, GA; and LeeAnn Reid of Myrtle Beach, SC. Sixteen Grandchildren, Dale (Kelsie); Sean (Skye); Chris Davis; Kaylee Frazier; Amber (Joel) Smith; April Dendy; John (Morgan) Dendy; Jillian (Joey) Ray: Capt. Brian Davis; Chase Davis; Bradley Davis II; Peter Davis; Mikayla Davis; B.J.; Sydney; Liam Mitchell. Thirteen Great Grandchildren, Jax Teal; Russ Lambert; Scarlett Hayden Smith; Tripp; Ryder; Crews; Jett; Kai; Riley Davis; Walker Grace; Jewel Dendy; Dendy Doane; Dory Ray. Norway family; The late Roar Hogner; Anne-Brit Hogner; Trond (Svanhild) Hogner; Grand Children Daniel and Charlotte Hogner; Leif (Janne) Hogner; Grand Children Maria, Martin and Thomas Hogner. Life-long best friends, Bob and Arlene Morrison of Seattle, Washington. Dorie was the Jewel of the family as you see above. She was truly an Angel with us on this side of Heaven, and now is with her love Wayne in Heaven. We miss you Mom, Grandma, Great Grandma.........You will forever live in our hearts and in our minds.......WE LOVE YOU! With respect to the times we are in, no public memorial is planned, but her family will celebrate her life appropriately within their means. In lieu of flowers, donations may be made to Palmetto Shores Church in memory of Dorie, and they will graciously steward to the needs of our own community for the many challenges being faced right now. Palmetto Shores Church: P.O. Box 31570 Myrtle Beach, SC 29588 Sign an online guestbook at www.goldfinchfuneralhome.com/obituaries. Goldfinch Funeral Home, Beach Chapel is honored to be assisting the Davis family.

The family of Eldora (Dorie) Ann Davis created this Life Tributes page to make it easy to share your memories.

Send flowers to the Davis family.