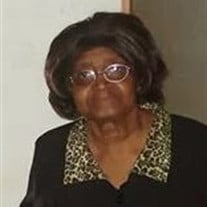 Longs, SC… Eliza J. Harrison, age 82, passed away Thursday, February 24, 2022. Mrs. Harrison was born in Horry County, SC a daughter of the late Rev. Eddie Richardson, Sr. and the late Henrietta Bellamy Richardson. She was a faithful member of St. John AME Church until her health began to fail. Mrs. Harrison also loved to sing and give God praise in various churches throughout her community. She was known for one of her favorites songs, "He Didn't Have To Do It, But He Did." She was a family caregiver who took great care of her brother and parents and was a member of the Order of the Eastern Star. Mrs. Harrison worked at the K&W Cafeteria on 79th Avenue in Myrtle Beach for over thirty years and also worked with Horry's Restaurant and Steven's Oyster Roast for many years. In addition to her parents, she is predeceased by one son, Anthony "Tim" Richardson; one granddaughter, LaShae Rowell; one son-in-law, Stephen Williams, Jr.; one sister, Martha Ellen Gore; and one brother, Nelson Richardson. Survivors include her husband, Frank Harrison, Jr. of Longs, SC; two daughters, Marsha Edge (Dennis) of Louisville, KY and Tammy Williams of Conway, SC; two sons, Charles E. Richardson (Graceann) of Durham, NC and Tracy Richardson of Longs, SC; one adopted son, Melvin Mack (Diane) of Tabor City, NC; one adopted daughter, Annie Mae Bellamy of Wampee, SC; two brothers, Jonathan Richardson of Holly Hill, SC and Eddie Richardson, Jr. of Durham, NC; two sisters, Jenny Richardson of Longs, SC and Rowena Flagler (Jackie) of Durham, NC; one daughter-in-law, Lizzie Richardson of Longs, SC; one brother-in-law, Leonard Gore, Sr. of Little River, SC; eighteen grandchildren; forty great grandchildren; and two great-great grandchildren. A funeral service will be held at 12:00 PM Wednesday, March 2, 2022 at St. John AME Church in Longs, SC with Rev. Gwen Stevenson officiating. Burial will follow in the Abigail Cemetery in Longs, SC. The viewing will be held from 11:00 AM to 12:00 PM on Wednesday at the church. The family requests that all in attendance wear masks and practice social distancing. Please sign an online guestbook at www.goldfinchfuneralhome.com Goldfinch Funeral Home, Conway Chapel is in charge of the arrangements.

The family of Mrs. Eliza J. Harrison created this Life Tributes page to make it easy to share your memories.

Send flowers to the Harrison family.