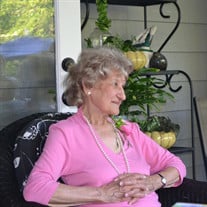 Elizabeth Jane Katchmar Parker, age 87, passed away peacefully at Grand Strand Hospital in Myrtle Beach on April 14, 2020. Elizabeth, as she preferred, was known to her friends and family as "Betty". She was born on May 4, 1932 in Windber, PA, a coal mining town close to Johnstown, PA to Mary and John Katchmar. John was a coal miner and an active member of the newly formed union. Betty was a graduate of Taylor Allderdice High School in Squirrel Hill, PA class of 1950. On August 15, 1950 Betty married her husband of 69 years, the late Ramon Alton Parker. The couple settled in Hopewell Township (Aliquippa, PA) in 1958, a suburb of Pittsburgh, where they raised their three children; Michael, Daniel and Joni. In 1984, the couple retired to Conway, SC (Ramon's hometown) and lived there the remainder of their years. Ramon passed last year on November 17, 2019. Betty will be remembered for her giving spirit, deep faith, and unconditional love. She was a talented writer who was both a contributor and editor for various publications over the years. She loved crossword puzzles, writing letters, and singing old standards. She had a voice her grandchildren would describe as angelic. Her apple pie was legendary. Betty gave much of her time, talents and treasures to supporting charities that benefitted the most vulnerable souls. She was a beloved parishioner at St. James Catholic Church in Conway where she remained very active until her passing. Betty served as an assistant to several church pastors over the years. Known as a gifted speaker, she served on Sundays as a lector and was known for her role in Good Friday's reading. Elizabeth "Betty" Parker is survived by her three children Michael, Daniel and Joni; her grandchildren Fae, Daniel, David, Shawn-Marie, and Skyler; and her great grandchildren Cassandra, Chandler, Rose, Cole, Henry, Gage and Nadia. She will be missed and celebrated by her family and friends. Her memory is a blessing to us all. Please sign the online guestbook at www.goldfinchfuneralhome.com

Elizabeth Jane Katchmar Parker, age 87, passed away peacefully at Grand Strand Hospital in Myrtle Beach on April 14, 2020. Elizabeth, as she preferred, was known to her friends and family as "Betty". She was born on May 4, 1932 in Windber,... View Obituary & Service Information

The family of Elizabeth Parker created this Life Tributes page to make it easy to share your memories.

Send flowers to the Parker family.