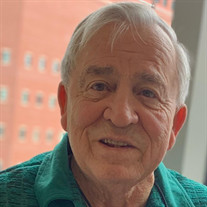 Elmore was born May 23, 1937 to Fred and Annie Ouellette and was the youngest of 8 children. In 1988 he married the love of his life, Joanne, and they moved to South Carolina where they had 32 wonderful years together. He was brought up working on the family ice pond/farm and helped with the oil business after the ice business was replaced with refrigerators. He was baptized at St. Rose of Lima and did schooling through the 8th grade at St. Rose before going on to Jay HighSchool graduating in 1955. He was confirmed at St. Rose and also served as an altar boy. He went on to become a 3rd Degree Knight for St. Rose. He was a very active member until the mid-80's when he moved to South Carolina. He then joined the KC's at St.Mary's. He would stand in front of Walmart in 90-degree weather and collect donations for the KC charities and talk to everyone. He was such a people person and never met a stranger. He was a 3-sport star athlete at Jay High School in baseball, football and basketball and especially excelled in basketball and football. After graduating high school, he served 2 years in the military. Upon returning home, he started working at InternationalPaper, first at the Otis Mill and then moving to the new Androscoggin Mill. He worked his way up to Supervisor in the Finishing Dept. and took his experience with him when he transferred to the Georgetown Mill in South Carolina. He worked closely with his brother Roland to help form the Area Youth Sports (AYS) program, joining together with numerous volunteers from the area coaching and mentoring boys and girls in baseball, football, cheerleading, and basketball. He also became anactive high school basketball referee, becoming one of the best refs in the state. He was a regular in state tournaments and even refereed a couple Celtics games that he loved to brag about. He was known for his consistency, fairness and great love of sportsand shared this passion with hundreds of kids over the years, influencing many to become coaches when they became adults. He had a huge influence on so many kids that he coached and they had great respect for him and many still call him coach. He was apast commander of the Amvets in Jay and was very involved in any fund-raising activities, especially the Special Olympics. When anyone needed something or wanted something done, he was the go-to person always willing to help. He was an avid fan of all NewEngland sports teams, especially his beloved Red Sox. He took up golf in his 40's and became quite good. He went to work on the Heritage golf course and loved it, and of course the free golf. He was extremely proud of his 3 boys, Rick, Doug and Jim. Although he didn't see them often, he spoke of them almost daily. The joy of his life was his grandchildren and great-grandchildren. They totally adored him. Who else teaches a 5-year-old to playBlackjack? He is survived by his wife, Joanne, his 2 boys, Rick (Chrissy) and Doug (Lori), his stepchildren Jeanne Greene (Bob), Julie Smith (Bruce), David Williams and Jerry Williams (Donna), 15 grandchildren, 8 great-grandchildren, his sister Claire Fitzpatrick andmany nieces and nephews. He was predeceased by his son, Jim, sisters Doris Simoneau, Jeannine Ouellette, Denise Gats, and brothers Roland, Paul, and Billy Ouellette. We request any donations be sent to the Roland Ouellette Scholarship Fund in care of Fred Ouellette, 53 Winding Brook Lane N., Wells, ME 04090

Elmore was born May 23, 1937 to Fred and Annie Ouellette and was the youngest of 8 children. In 1988 he married the love of his life, Joanne, and they moved to South Carolina where they had 32 wonderful years together. He was brought up working... View Obituary & Service Information

The family of Elmore R. Ouellette created this Life Tributes page to make it easy to share your memories.

Send flowers to the Ouellette family.