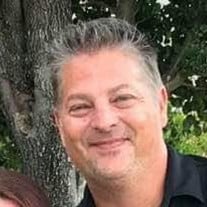 ERIC JON LANGE March 27, 1971 – July 4, 2020 Eric Jon Lange was born March 27, 1971, at Somerset Hospital in Somerville, New Jersey to his loving parents, Theresa H. Lange & Cyrus J. Lange and his older brother Jeff Lange. Eric passed unexpectedly peacefully in Myrtle Beach on July 4, 2020, surrounded by his loving family and friends. Eric is survived by his wife, Theresa and son Austin; his mother, Theresa of Whitehouse Station; his brother Jeff and his wife Cindy of Bridgewater and is predeceased by his father Cyrus and many Aunts, Uncles, and Cousins in the area. Eric met his wife, Theresa “Tree” in grade school by the school locker where they started a storybook lifetime journey together. After grade school, they became high school sweethearts and shared a marriage that lasted 23 wonderful years. They were blessed with a son, Austin Lange, who recently celebrated his 13th birthday. Eric graduated from Hunterdon Central Regional High School in 1989 and went on to Raritan Valley Community College and followed up his studies in communications at Rutgers. While in High School, Eric wrestled for Russ Riegel. Eric was known to be an extraordinarily strong competitor who demonstrated excellence in his athletic ability in and out of sports. He was persistent and passionate about reaching his athletic goals and mission for success in which he helped lead the team to the State Championships in 1989. Knowing Eric, you knew his spirit and how passionate he was about life. Eric was an entrepreneur who enjoyed start-up businesses. He owned EJL Enterprises, Inc. where he expanded and built an Avis Enterprise Car and Truck Rental Business in Somerville, NJ. He later obtained his Real Estate License and Broker License and built and managed Golden Home Realty LLC. Located in Bridgewater, NJ. Eric had a heart for helping others and he was focused on supporting his clients. Initially as a realtor and broker for his own firm, he worked to help his clients find their start-up or forever homes. He enjoyed helping others and you could count on him with any support or help that he could give. Whether he helped someone person-to-person, in the community, for a charitable organization or working on a project to build up local communities, Eric liked to give of his time and talents. In the last few years, he focused on working with investors on the purchase and the sale of investments properties. Eric was well-known and well-respected by all his clients. Goldfinch Funeral Home, Carolina Forest, Myrtle Beach, assisted the family.

The family of Eric Jon Lange created this Life Tributes page to make it easy to share your memories.

Send flowers to the Lange family.