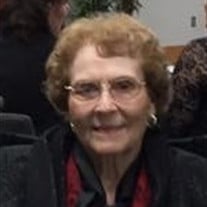 Loris... Estelle Smith Graham Wright, age 97, passed away Wednesday, March 20, 2019. Estelle was a native of Horry County, SC, and lived there all of her life. Her parents were the late David Earl Smith and Lucille Mishoe Smith. She was a graduate of Aynor High School, and after attending Berry College (Rome, GA) and Furman University (Greenville, SC), she taught school for 23 years in Horry County. She was predeceased by her first husband, Horace Graham of Loris, and her second husband, Fulton Wright of Tabor City, NC, as well as her son, Bobby Graham of Houston, TX. Her siblings included Flora Mae Smith Jernigan of Pine Bluff, Arkansas, Raymond Smith of Conway, Irma Smith Thomas of North Charleston, Keith Smith of Aynor, Eleanor Smith Taylor of North Charleston, and LeReta Smith Craven of Charleston. Throughout her life, Estelle was active in volunteer endeavors and civic affairs in her home town of Loris. She was elected to the Loris City Council in January, 1994, and continued to serve her community in that capacity for a total of 20 years until her retirement from public office in 2014. During her years on the City Council, she was instrumental in the renovation of City Hall and in 2002 served on the Loris Centennial Committee in the celebration of Loris' 100 years of incorporation . Her centennial gift was the stately Town Clock, which stands in the center of Loris as a testament to her love of and dedication to her community. Estelle gave generously of her time and talents. Her extensive volunteer work included teaching Sunday School and singing in the choir for many years at Trinity Baptist Church and Loris First Baptist Church. She also served as a member of the Ladies' Auxiliary at the Loris Hospital, and volunteered with the United Way of Horry County, the Red Cross Blood Bank, the American Heart Association, the American Legion Auxiliary, and the Concerned Citizens' Operation Reach-Out. She was recognized by the town of Loris and the state of South Carolina numerous times for her many contributions. She was awarded the Loris Chamber of Commerce Citizen of the Year in 2010, and the Lifetime Achievement Award in 2015. In 2003, she received recognition by the SC Senate and House of Representatives for dedication to her community and the citizens of Horry County. After being widowed, Estelle greatly valued her friends, in particular, Ila Wright and Odetha Strickland. She felt deep appreciation for them and others who helped her along the way. Funeral services will be held at 2:00 p.m. Saturday, March 23, 2019 at Goldfinch Funeral Home, Loris Chapel with Rev. Douglas Craven officiating. Burial will follow in the Twin City Memorial Gardens. The family will receive friends from 1:00-1:45 p.m. Saturday at the funeral home prior to the service. In lieu of memorials, give to someone in need. Please sign an online guestbook at www.goldfinchfuneralhome.com Goldfinch Funeral Home, Loris Chapel is serving the family.

Loris... Estelle Smith Graham Wright, age 97, passed away Wednesday, March 20, 2019. Estelle was a native of Horry County, SC, and lived there all of her life. Her parents were the late David Earl Smith and Lucille Mishoe Smith. She was a... View Obituary & Service Information

The family of Estelle Smith Graham Wright created this Life Tributes page to make it easy to share your memories.

Send flowers to the Wright family.