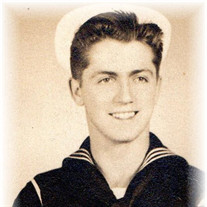 Myrtle Beach… Eugene E. "Gene" Nagele, age 92, passed away Thursday, January 9, 2020. Born May 2, 1927 in Philadelphia, PA, he was the son of the late William and Catherine Schaible Nagele. Mr. Nagele joined the US Navy when he was 16. He served our grateful nation for 30 years, during WWII in the Pacific, the Korean War, and the Vietnam War. Mr. Nagele retired as a Commander. Following his retirement, he became a contractor for the US Government in foreign military sales for 18 years. In 1992, he retired to Myrtle Beach. Mr. Nagele was a member of VFW, American Legion Post #178, the Elks, and a lifetime member of the Shriners. He enjoyed going on cruises and flying RC planes and boats. Along with his parents, Mr. Nagele was predeceased by his wife of 57 years, Rosina Pauline Nagele, a brother, William Nagele, a sister, Catherine Nagele, sister-in-law, Dorothy Herbig, and two brothers-in-law, John Kalbfel and Robert Kalbfel. Surviving are one son, Eugene E. Nagele, Jr.; a daughter, Regina Collins (David); three grandchildren, Brian Vanderpool, Wayne Vanderpool (Brooke), and Gregory Vanderpool (April); six great-grandchildren; and two sisters-in-law, Diane Kalbfel and Dorothy Nagele. Graveside services with Military Honors will be announced at a later date at Arlington National Cemetery, with the burial to follow. Please sign the online guestbook at www.goldfinchfuneralhome.com Goldfinch Funeral Home, Conway Chapel is serving the family.

The family of Eugene E Nagele created this Life Tributes page to make it easy to share your memories.

Send flowers to the Nagele family.