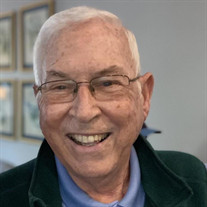 Francis De Sales Mudd, Jr. 76, of Pawleys Island, SC, passed away at home surrounded by his loving family on, March 10, 2021. Born in Washington, DC, Frank, was the son of Francis De Sales Mudd and Louise E. (Finan) Mudd. He attended Archbishop Neale Catholic School for 12 years. He continued his education at Charles County Community College (now College of Southern Maryland) High Point College (University) and received an MBA from Golden Gate University, while stationed at Mather Air Force Base in California. He is survived by his wife, Jean of 53 years. His children, Holly (Casper), her husband Brian, and their son Jarrod Nicholas, Francis DeSales Mudd, III (FD), his wife Nancy (Ramsbottom) and their son Francis De Sales, IV (De Sales), Thomas Anderson (Andy) Mudd, his wife Amy (Neal) and their children Lauren Elaine and Nicholas Ryan, and Marjorie (Marji) (Gray) and her husband Christopher and their children Logan De Sales and Isabelle Marie. His grandchildren called him Paw- Paw, he loved them and enjoyed following their activities. He is also survived by his brothers Thomas F. and wife Judy and John F. and wife Mary (Mimi) Mudd. His sisters, Judy Jacoby and Louise Mudd and the late Patricia Mudd Kannapell. He is also survived by many cousins, nieces, nephews and grand nieces and nephews. Frank began his career as the Director of Tri County Youth Services Bureau and a teacher at Charles County Community College. Later he became the Human Resource Director at the College. Upon leaving the community college he opened his own consulting firm FDM and Associates in La Plata, MD. He later joined Southern Maryland Electric Coop (SMECO) as VP of Human Resources, where he retired in 2006. During his working years, he continued to teach, establishing a 40 year career at the College of Southern Maryland. As he was always giving back to the community he served on several boards including: The Board of Civista Hospital (UM CRMC), The Charles County Nursing Home (Sage Point Senior Living Services), Hawthorne Country Club, Hospice of Charles County, Sacred Heart Parish Council (La Plata, MD), St. Vincent DePaul Society and The Arc of Southern Maryland. Frank was the consummate gentleman. He always looked out for others. He was a sounding board for his children and was famous for his “yellow pad” talks. He led by example and helped each child find success in their professions. He was a faithful follower of Christ and worshiped his God with devotion. Frank and his wife Jean, retired to Pawleys Island, SC in 2013. Frank played golf, volunteered at St. Cyprians Catholic Church, and served on the Board of Directors of Pawleys Plantation. His family gave him his greatest pleasure and sense of accomplishment. He will be missed by his family and many friends both in Maryland and South Carolina. A Mass of the Christian Burial will be celebrated at Precious Blood of Christ Catholic Church, Pawleys Island, SC at 10:00 a.m. on Thursday, March 18, 2021. The service in Maryland will begin with a visitation and prayers at St. Peter’s Catholic Church, Waldorf Maryland from 4:00 p.m. to 8:00 p.m. with prayers at 7:30. On Tuesday, March 23, 2021. The funeral Mass of Christian burial will be at St. Peter’s Catholic Church on Wednesday, March 24, 2021 at 10:00. A private burial will be held at St. Ignatius Church Chapel Point, in Charles County, Maryland. The family would like to thank all the Doctors and nurses, the therapy personnel, and Amedisys/Hospice of Georgetown County for their wonderful care during Frank’s illness. In lieu of flowers: donations may be made to either: Amedisys Hospice, 402 Singleton Ridge Rd. Suite C, Conway, SC 29526 or Low Country SC Chapter/American Red Cross, 2424 A City Hall Lane, North Charleston, SC 29406. Please support the family by signing and sharing memories on their guestbook www.goldfinchfuneralhome.com Goldfinch Funeral Home, Beach Chapel is assisting the family.

The family of Francis DeSales Mudd Jr. created this Life Tributes page to make it easy to share your memories.

Send flowers to the Mudd family.