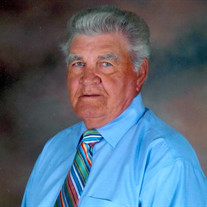 Nichols... Fred G. Lewis was born October 29, 1927, to the late Elijah L. and Mattie T. Lewis and grew up in the Mount Olive Community in the North Western part of Horry County. Mr. Lewis served his country in the U. S. Army from 1950 to 1952. During this time of active duty, he was stationed at Ft. Jackson (Columbia, SC) and Ft. Benning (Columbus, Ga). Mr. Lewis was a former member of Mount Olive Baptist Church where he served as Deacon, Sunday School Teacher, Sunday School Superintendent, Treasurer, Usher and Trustee. He presently was a member of Grassy Bay Baptist Church. Mr. Lewis held true to his rural heritage by making the elements of agriculture a part of his career. He began early by working on the family tobacco farm. From that he began working for and later managed the Mount Olive Milling Company for twelve years. It was with this company he acquired the experience and knowledge of making livestock feed. He later began working for and managed the Nichols Feed Mill, Inc., later known as ADM (Archer Daniels Midland) Company in Nichols, where he continued to manage the feed mill and began raising livestock for the company. He worked for ADM until his retirement in 1992. Mr. Lewis had a tremendous love for gardening and watching plants grow. From Spring to Fall each year, his yard was a show place; an exhibition of color showing his love for the beauty of nature. He was continuously looking for new and unusual plants to add to his showpiece. His abilities were just as great in growing vegetables and fruits. The bounty from his vegetable garden and fruit trees were surpassed by none in the area and he was forever giving advice about what was needed to produce the biggest and the best. Mr. Lewis had a love for his family. His wife of 63 years, Sarah Francis Duncan Lewis, was the love of his life. He and Mrs. Lewis had two children Freddy (Fred G., II) and Amy Kay (Norris). Amy, his daughter, was the apple of his eye and his son, Freddy was his pride. He did everything possible to see they had a degree from the college of their choice. Mr. Lewis is survived by his wife, Sarah: two children; Freddy (Cyndi) Lewis and Amy (Danny) Norris: four grandchildren; Tiffany Lewis (Brian) Stefan and Fred G., III "Trey" (Michelle) Lewis, Ashley Nicole Norris, James Floyd Norris and four great grandchildren; Christopher Michael Jones, Anderson Lewis Jones, Pressley Grace Lewis and Piper Elise Lewis, and numerous nieces and nephews. He is predeceased by his brother A.V. Lewis and sister, Berlyne Lewis LeGette. In lieu of flowers, monetary donations may be made to Grassy Bay Baptist Church Building Fund, Attn: Ms. Bonnie F. Vaught, 3400 Bayview Drive, Green Sea, SC 29545. Funeral services will be held at 3:00 p.m. Saturday, October 14, 2017, at Mt. Olive Baptist Church with Rev. Billy Ray Phillips officiating. Burial will follow in Mt. Olive Baptist Church Cemetery. Visitation will be from 1:30 - 2:45 p.m. in the church fellowship hall prior to the service. Please sign a guestbook at www.goldfinchfuneralhome.com Goldfinch Funeral Home, Loris Chapel is serving the family.

Nichols... Fred G. Lewis was born October 29, 1927, to the late Elijah L. and Mattie T. Lewis and grew up in the Mount Olive Community in the North Western part of Horry County. Mr. Lewis served his country in the U. S. Army from 1950 to 1952.... View Obituary & Service Information

The family of Fred G. Lewis created this Life Tributes page to make it easy to share your memories.