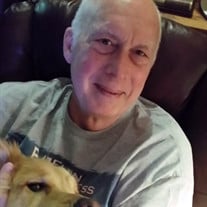 Bud Lewis was a Renaissance man with many talents and knowledge. He believed that the words to one of his favorite songs, "Wand'rin Star" by Lerner and Loewe would be his life's journey. Born in Conway, SC, to the late Freeman Anderson "Kit" Lewis and Sarah Kirby Lewis, it was Bud's good fortune to have spent his formative years in Conway, a city in which he had great pride. He attended Elementary School in Conway. The people who knew him then still call him Freeman. Bud's family moved to Windy Hill Beach, SC, when he entered the fourth grade. They lived in the only beach house in Windy Hill at that time. As a boy he worked at his dad's Esso station in Conway and at his dad's place of business, Kit's Pier, in Windy Hill. He heard the call to the military early in life. He attended Georgia Military Academy in Atlanta and graduated High School there in 1960 as a leader and friend to all. Bud acquired his pilot's license at 18 and bought a Piper Cub. His airplane came in handy when he was accepted to The Citadel in Charleston, SC. He flew his new airplane to Charleston and back to North Myrtle Beach by following the coastline. Bud loved attending air shows, especially Oshkosh, where he experienced miles of airplanes on display. You could occasionally find him reading a book with an airplane on the cover. He was a voracious reader. His ceiling to floor bookcase held all of the classics. His favorite writer was Larry McMurtry. Following his dad's death, Bud became CEO of Lewis Truck Lines in Conway. His dad started the company in 1935 with five trucks. By the end of Bud's retirement in 2010, he had grown the company to nearly a hundred owner operator long haul trucks. He met his first wife, Patricia Antoinette Lee, at the beach lifeguarding in front of the Shore Crest Hotel in Windy Hill. They fell in love, got married, and raised two children, Steve Anderson Lewis and Kit Amber Lewis. For the next twenty years they lived in a house on Lewis Street that Bud remodeled and expanded. Bud later met and married Lori Randall. Bud and Lori married in a Wedding Chapel in Las Vegas in 1987. They traveled to the Bahamas, the Caribbean, and cruised all over the world. Bud’s favorite place was Venice, Italy. He loved boats as much as he loved airplanes. He and his wife built a house in Murrells Inlet. There they rescued cats. They acquired a cat every year for the first fifteen years of their marriage. Bud loved dogs as much as cats. His favorites were the Golden Retrievers named Gus, Scout, Luke, and Hart. He named all of his animals after cowboys and saloon girls from his favorite Western movies and tv programs. Daily, you could hear the songs of "Maverick" or "The Lawman" coming from the tv in his man cave. Bud joined the US Airforce and served a year stationed in Vietnam and a year in Korea. The DAV held a special place in his heart. He was known for long talks full of history and jocularity --- his favorite word. He could tell a joke like no other. His hobbies were football, basketball, and baseball in no particular order. He was an avid Braves fan and pulled for all of the ACC teams, especially NC State and North Carolina. On the weekends you knew where to find him with a game on, a beer in hand, and a buddy by his side. He was a man of depth and character. If he loved you, he had your loyalty and back forever. He loved fully, freely and deeply. His birthday on Eleven / Seven made him a lucky man. Bud died at Grand Strand hospital on Friday, December 11, 2020, with his family by his side. He is proceeded in death by his father, Freeman Anderson "Kit" Lewis, Senior and his mother, Sarah Kirby Lewis, his first wife Patricia Antoinette Lee Lewis, and his cousin Morgan Lewis. Survivors include, Lori Randall Lewis, children Steve Anderson Lewis (Ericka) and Kit Amber Lewis, sisters Sarah L. Lewis and Louise Kirby Lewis, sister-in-law, Robbin Randall and his longtime friends, Admiral Bennie Suggs, Larry Hartsell, and Lamar Bennett. Due to covid there will be no service at this time. Plans for a memorial service will be announced in the summer. Memorials may be made to The Citadel Foundation, 171 Moultrie Street, Charleston, SC, 29409. Please sign an online guestbook at goldfinchfuneralhome.com. We thank you for your love and prayers in advance. Goldfinch Funeral Home, Beach Chapel is serving the family.

Bud Lewis was a Renaissance man with many talents and knowledge. He believed that the words to one of his favorite songs, "Wand'rin Star" by Lerner and Loewe would be his life's journey. Born in Conway, SC, to the late Freeman Anderson... View Obituary & Service Information

The family of Freeman "Bud" Anderson Lewis Jr. created this Life Tributes page to make it easy to share your memories.

Bud Lewis was a Renaissance man with many talents and knowledge....