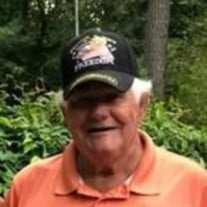 George Alfred Morris really is doing GREAT today! He's gone on up to The House, just 32 years and 10 months shy of his 120th Birthday he swore we would all get to see. George "Pop" Morris was born in Noxapater, Mississippi the youngest child... View Obituary & Service Information

The family of George Morris created this Life Tributes page to make it easy to share your memories.

Send flowers to the Morris family.